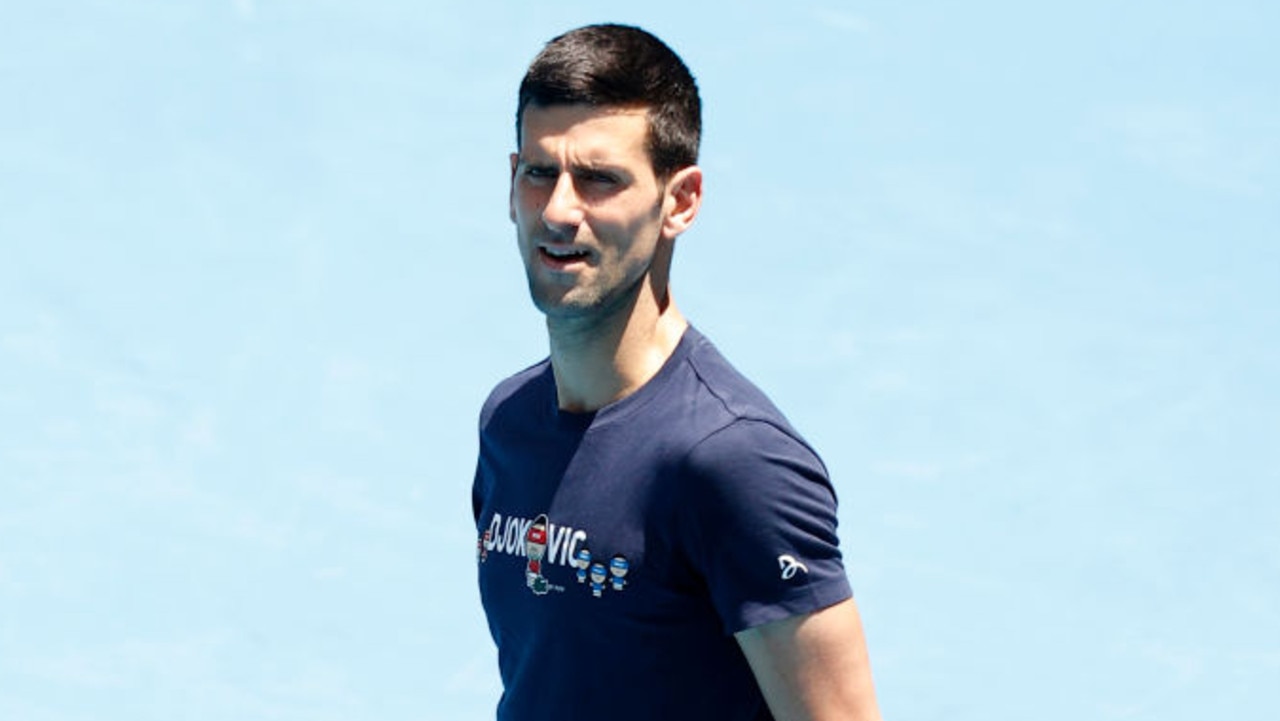 Australian Immigration Minister Alex Hawke has made a call on Novak Djokovic’s visa situation, sparking a huge reaction around the globe.

The decision to send Novak Djokovic home has sparked a huge reaction from people across the globe following the hotly anticipated announcement on Friday afternoon.

He claimed it was “in the public interest to do so”.

Djokovic admitted to incorrectly filling out his Australian Travel Declaration form when he ticked a box saying he had not travelled in the 14 days before flying to Australia, despite proof he had gone from Serbia to Spain in the two weeks before departing for Melbourne.

However, the world No. 1 said his agent filled the form out for him.

“This was a human error and certainly not deliberate,” he said, blaming “challenging times in a global pandemic” for the mistake.

Watch Tennis Live with be IN SPORTS on Kayo. Live Coverage of ATP + WTA Tour Tournaments including Every Finals Match. New to Kayo? Start Your Free Trial >

Last week’s decision to cancel Djokovic’s visa was overturned in the Federal Circuit Court on Monday but Mr Hawke still had the final say on whether the 20-time grand slam champion was allowed to stay in the country.

A directions hearing is being held in the Federal Circuit Court on the Djokovic issue.

Djokovic has sought an urgent injunction to prevent the government from deporting him and given the rapidly approaching Australian Open, the tennis world number one wants his case to be decided on Sunday.

As expected, social media exploded in reaction to the decision

Everyone from newsreaders, politicians, tennis commentators and local barflies have weighed in on what has become a major international story over the past week.

Veteran tennis journalist Ben Rothenberg said the saga may not be over yet, with Djokovic still appealing. Djokovic also faces a potential three-year ban from re-entering the country, but has not yet been removed from the 2022 tournament draw.

“We wait to see if, when, and how Djokovic might appeal this decision. We also await clarity on if Australia would seek to enforce the three-year ban from re-entering the country that can accompany such a deportation order. Djokovic has not yet been removed from #AusOpen draw,” he tweeted.

Prime Minister Scott Morrison briefly commented on the decision but refrained from adding more “due to the expected ongoing legal proceedings”.

“Australians have made many sacrifices during this pandemic, and they rightly expect the result of those sacrifices to be protected,” he said Friday evening.

“This is what the Minister is doing in taking this action today. Our strong border protection policies have kept Australians safe, prior to Covid and now during the pandemic.”

Tweets kept rolling in from around the globe as the world woke to the news.

Former Prime Minister Kevin Rudd slammed the Federal Government for the debacle, saying Mr Morrison was trying to show voters how “hairy-chested” he is.

Opinions on his visa cancellation varied wildly, from people believing his attempt to enter Australia posed a genuine health risk to a nation with hundreds of thousands of active cases, to others who believed his cancellation was an indictment of justice and set a dangerous precedent for travellers entry to the country based on a personal medical decision.

“Australia really is a banana republic. Djokovic deported on the grounds of public health, as if the unvaccinated are lepers. This is the exercise of arbitrary power overruling a court judgment. Australia has become a nasty, authoritarian state,” he tweeted.

Others, like New York Times reporter Gabe Hudson, believed Djokovic “literally turned himself into a bioweapon and arrived like some conqueror who doesn’t give sh*t abt (sic) their laws or ppl (sic)”.

Over in the tennis world, UK great Andy Murray said: “I am not going to sit here and start kicking Novak while he is down. I said it the other day, it is not a good situation for anyone.”

In Australian media, host of The Project Lisa Wilkinson cut straight to the chase moments after the decision was made, discussing the situation with Aussie tennis legend Rennae Stubbs.

“6pm Friday night, dropping a story, is a classic political move if you want to kill a story, but I don’t think it will be killed. How do you think Novak will feel right now?” Wilkinson asked.

“I think sad, probably a little bit angry. A bit bemused. Unsure. You name it. I’m not in his head but I suspect, I have a feeling he will try and fight this at some point,” Stubbs replied.

On Wednesday, Djokovic spelled out exactly what he did on the days before and after his positive Covid result last month.

In an Instagram statement, Djokovic said he attended a basketball game in Belgrade on December 14, after which a number of people tested positive to Covid.

He said he took a rapid antigen test on December 16, despite having no symptoms, which came back negative, and then out of “an abundance of caution” also took a PCR test on the same day.

“The next day (December 17) I attended a tennis event in Belgrade to present awards to children and took a rapid antigen test before going to the event, and it was negative,” Djokovic wrote.

This is the event at which Djokovic was pictured maskless with a group of children.

”I was asymptomatic and felt good, and I had not received the notification of a positive PCR test result until after that event,” he continued.

Djokovic also admitted on social media to going through with an interview and photo shoot on December 18, despite knowing he was Covid-19 positive. He didn’t tell anyone at L’Equipe he had contracted the virus, calling it an “error of judgment” that saw him slammed on social media.