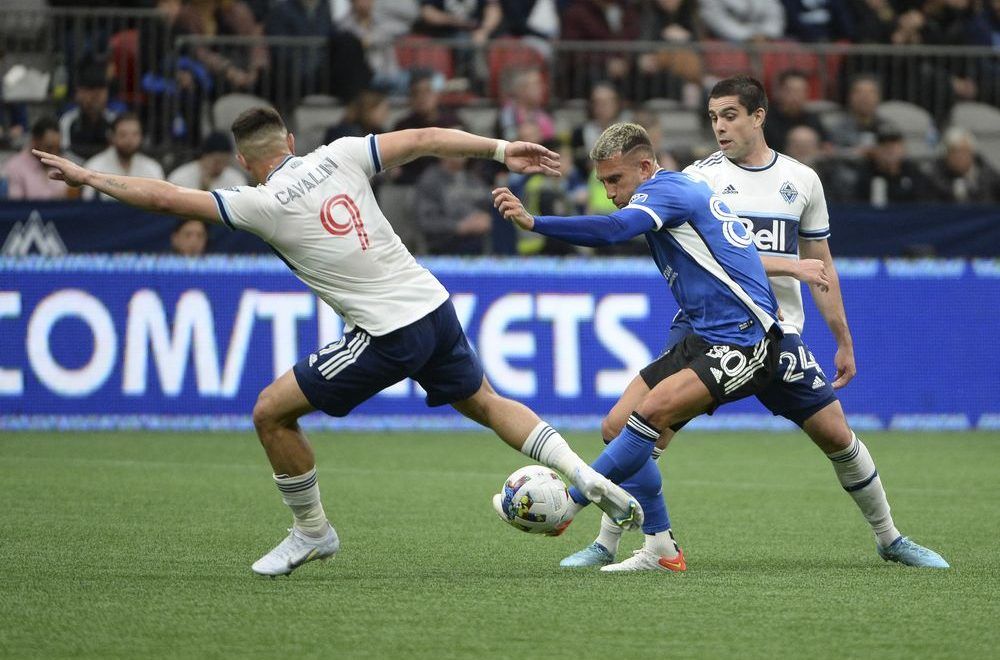 Reviews and recommendations are unbiased and products are independently selected. Postmedia may earn an affiliate commission from purchases made through links on this page.

There were those in the Vancouver Whitecaps organization who stressed that Erik Godoy returning to the starting lineup didn’t make him a saviour.

That didn’t stop him from playing the hero Saturday night at B.C. Place.

In his second full 90-minute stint after being injured since the start of the season, Godoy’s 90th minute equalizer capped a crazy second half where the Caps and San Jose Earthquakes combined for six goals in a 3-3 tie.

Lucas Cavallini and Ryan Raposo also scored for Vancouver (2-6-2, 14th West), who ceded their bottom-feeding position of the Western Conference to the Seattle Sounders.

Jeremy Ebobisse, with two, and Jamiro Montiero scored for San Jose (2-5-4, 11th West), who had lost their previous four road games this year.

The game ended with a Cavallini header glancing off the outside of the post, nearly stealing three points for the Whitecaps and sending the announced crowd of 15,087 home happy.

Here’s what we learned.

Raposo used to be a trivia question: “Who was the player picked just before $10M West Brom transferee Daryl Dike in the 2020 MLS SuperDraft?”

Raposo had a goal and an assist Saturday afternoon, making his second straight start and scoring in consecutive games. He now has three goals and an assist in nine appearances this year.

“Ryan is a fighter. Ryan is he’s a guy that even at the beginning of the season saw himself may be very low in the depth chart,” head coach Vanni Sartini said on Wednesday.

“He fought, he went through learning a new position as a wingback. He needs to maybe improve a little more defensively, but he’s given us a lot of quality.”

Cavallini’s biggest contribution to the Caps’ opening goal — apart from actually scoring it — was his magnificent sell job to win a free kick just on the Vancouver side of midfield, convincing referee Tim Ford he’d been maligned.

While the Quakes were arguing the call, Flo Jungwirth took the kick quickly, and one touch later, Cavallini had it in space. A deft give and go with Raposo led to a low, bottom corner grass-burner from Cavallini to make it 1-0 in the 54th.

The Quakes goal came from their considerable possession, which most of the time in the final third looked like they were trying to walk it across the line instead of putting it into dangerous spots. But Cristian Espinoza changed that with a quick cross from the baseline, and Montiero — slinking between Michael Baldisimo and Jungwirth — rose up to head the tying goal home in the 62nd minute.

San Jose took the lead 10 minutes later after having a promising attack of their own snuffed out. Dieber Caicedo got barged off the ball just outside the Quakes box, and with the crowd booing as the ball went the other way, Cade Cowell put a cross right on to Ebobisse’s boot for a one-touch goal.

But it took just two minutes for Raposo to respond, with Caicedo freezing the defenders and finding his teammate alone at the corner of the six-yard box.

Two more goals came in quick succession, with Godoy connecting on a low volley to put a corner kick into the back of the net just as the clock ticked over 90 minutes.

There will continue to be little rest for the Whitecaps, with four more games staring them in the face before the month is out. It’s another Wednesday (FC Dallas), Sunday (Charlotte FC), Wednesday (Cavalry FC), Saturday (Sporting KC), with the last three on the road.

Long-term injuries to Thomas Hasal, Triston Blackmon and Caio Alexandre will have hopefully healed by then, and the visa paperwork slowing down Andrés Cubas’ arrival solved.

But it means plenty of squad rotation for the Caps, and a constantly shifting starting XI.

“I love it, to be honest,” said head coach Vanni Sartini said earlier this week. “I like it so I can tinker the formation without you saying that I changed too much. We need to be very careful.

“So we’ll have, of course, to juggle the 11 every time and try to play the best team on every game. I’m happy that Leo (Owusu) is back, Guti (Cristián Gutiérrez) is back, Caio will start training full (Thursday) then in the two weeks he will be able to play again.

“So we have players now and we can make rotation. And maybe there’s magic from immigration and Cubas is here next week. It’s going to be good because I have a lot of players now that can play.”

Sign up to receive daily headline news from The Province, a division of Postmedia Network Inc.

The next issue of The Province Headline News will soon be in your inbox.