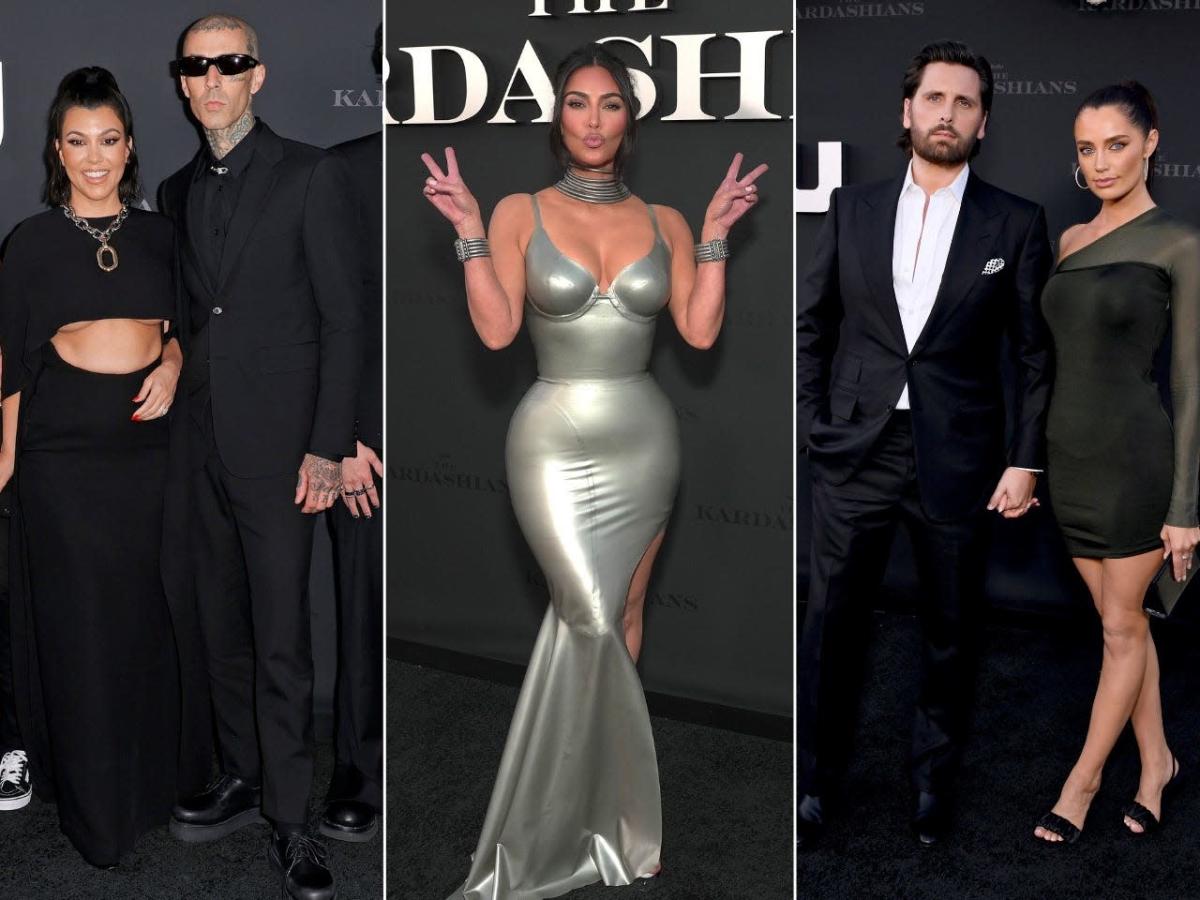 Kardashian momager and matriarch Kris Jenner wore a vibrant loose-fitting pink gown, which she paired with a matching clutch and studded pink stilettos.

Elle reported she was spotted rocking a shoulder-length bob while celebrating the launch of Kylie Jenner’s new makeup collection on Wednesday, though her hair was back in her signature pixie look for the red-carpet premiere of “The Kardashians.”

Kris Jenner’s boyfriend Corey Gamble, who she began dating in 2015, also made an appearance on the red carpet for the family’s new show.

Like Jenner, Gamble opted on wearing pink for the occasion. He wore a baby-pink shirt beneath his single-breasted black suit, which he accessorized with a similarly shaded pocket square.

While Kim Kardashian arrived and left with her new boyfriend Pete Davidson, she opted to walk the red carpet for the premiere of “The Kardashians” solo, Metro reported.

The beauty mogul and Skims founder wore a silver skin-tight Thierry Mugler gown that featured a thigh-high slit, which she paired with matching metallic bangles and a choker, according to the Evening Standard.

Khloe Kardashian had a style twinning moment with her daughter True Thompson in a beige silky gown.

Khloe Kardashian and True Thompson had an adorable mother and daughter twinning moment on the red carpet.

The youngest Kardashian sister wore a silky nude-colored floor-length gown that had a figure-hugging bodice, and topped off the look with a pair of sunglasses. Three-year-old True wore a matching colored dress with a pair of high-top white sneakers.

Scott Disick went for a classic black and white suit while his new girlfriend, Rebecca Donaldson, opted for an emerald mini-dress.

Scott Disick and model Rebecca Donaldson went red-carpet official with their relationship at “The Kardashians” premiere.

Disick, who shares three children with Kourtney Kardashian, wore a classic black suit with a white shirt while Donaldson rocked an emerald green minidress that had a sheer single sleeve.

Kourtney Kardashian, Travis Barker, and their children rocked up in coordinating black outfits.

Kourtney Kardashian and Travis Barker, who unofficially tied the knot in a Las Vegas chapel after the 2022 Oscars, wore coordinating black outfits with their children to the red carpet premiere of the family’s new Hulu show.

Kourtney, who was pictured with her son Reign, wore a dress that featured a daring mid-body cutout while her Blink-182 fiancé wore an all-black suit and shades.

Khadijah Haqq McCray wore a sparkly black mini-dress and heels, while her twin Malika Haqq opted for a gold number.

Twins and recurring guests of the Kardashians’ former show, Khadijah Haqq McCray and Malika Haqq, also made an appearance at the Hulu premiere.

Khadijah Haqq McCray wore a sparkly black minidress with a pair of black stilettos while her sister went for a shimmery gold wrap dress and matching heels.

According to an Instagram post shared by her stylist, Kris Fe, the gown is vintage Versace, and she coordinated it with a pair of strappy heels.

Kim Kardashian-West’s close friend and recurring guest on “Keeping up With the Kardashians” Jonathan Cheban walked the red carpet in a nearly all-black ensemble.

Cheban, who goes by “Food God” on social media, layered a suit jacket over what appeared to be a Louis Vuitton branded shirt.

The singer accessorized with a pair of red-rimmed sunglasses and knee-length scarlet boots.

RHOBH star Dorit Kemsley wore a black and white patterned outfit that comprised of a miniskirt, crop top, and mini cardigan to the premiere.

She accessorized the ensemble with an ivory-white clutch and platform sandals.

Read the original article on Insider