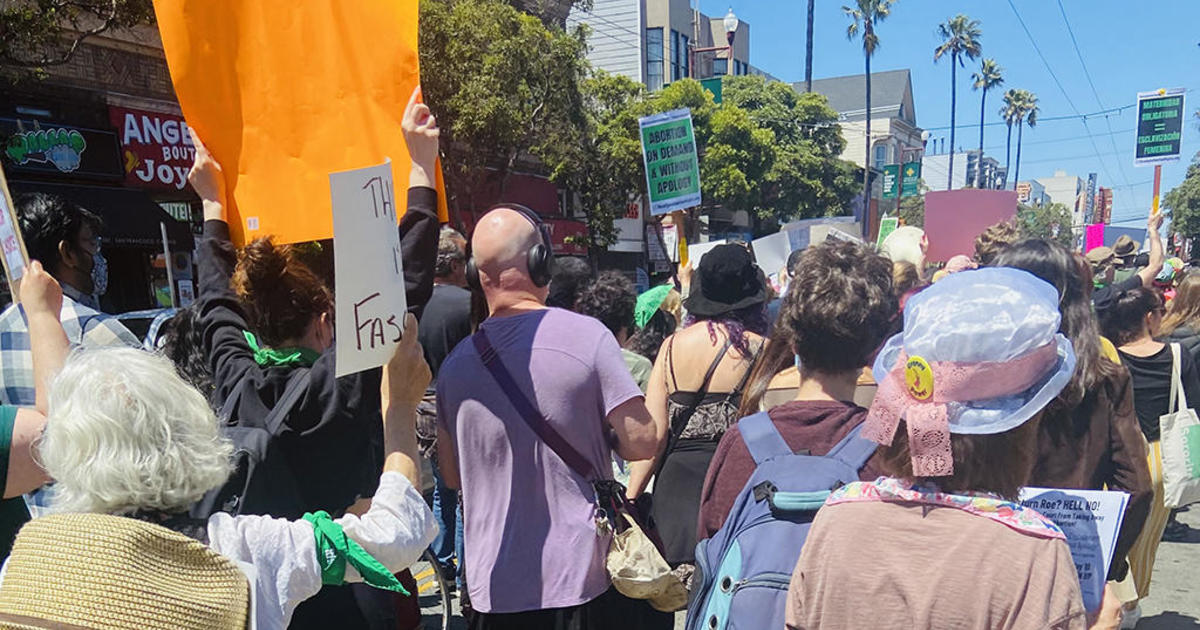 SAN FRANCISCO (CBS SF) — Thousands of people marched and rallied in San Francisco in support of reproductive rights and a San Mateo County supervisor issued a statement in favor of pro-choice sanctuaries Saturday.

The actions were in response to the leak earlier this month of a draft opinion from the Supreme Court that would overturn the landmark 1973 abortion ruling Roe v. Wade.

Ever since the leak, activists in the Bay Area have been responding with a variety of actions on both sides of the issue.

On May 3, a man who called himself the “Pro Life Spiderman” on social media was taken into custody after climbing Salesforce Tower in the 400 block of Mission Street in San Francisco. Identifying himself as Maison Des Champs on social media, he wrote on his website that he is aiming to raise $1 million for anti-abortion charities.

The first, a speak-out, was held at 10 a.m. at Civic Center Plaza by the National Mobilization for Reproductive Justice – San Francisco.

“We are the court of public opinion, and we will get the justices to hear our demands to preserve Roe and to extend health care for all,” Norma Gallegos of the National Mobilization organization said at the speak-out.

“It is important that we all rise up right now because the fall of Roe isn’t the end, it’s just the beginning,” said Vine Sanchez, who traveled from his home in Lodi to speak at the event.

In an interview after the speak-out, Sanchez said, “Roe wouldn’t directly impact my body but I feel (protesting) is the least I can do for the women in my life that I love. Whether it’s your mother or wife or girlfriend, you have to stand up for their rights.”

As part of the speak-out, the Raging Grannies Action League, a group of elder women who support social justice causes, sang at the event.

“Most of us were around before abortion was legal. We don’t want to go back to the bad old days,” said Ruth Robertson, the group’s convener, in an interview.

After the speak-out, Women’s March SF led a march along Market Street held in conjunction with similar marches nationwide. The march began at Grove and Hyde streets and ended at Embarcadero Plaza at Market and Steuart streets.

“With a continuing assault on women’s reproductive rights, we need to create ‘Pro Choice Sanctuaries’ and ‘Buffer Zones’ at abortion clinics to protect the privacy and rights of the women who are seeking reproductive patient care, even if they are coming from out of state,” Canepa said.

Canepa said he felt the county should work with cities to create buffer zones at every health care clinic in the county that provides reproductive health care.

“We’ve seen an uptick of protests at clinics such as the Planned Parenthood located on 2907 El Camino Real on the edge of Redwood City. Therefore, I agree with the Redwood City Council that the county should create a buffer zone,” the supervisor said.

“No woman should be in fear of caring for her own body by seeking health care at these clinics,” Canepa said.