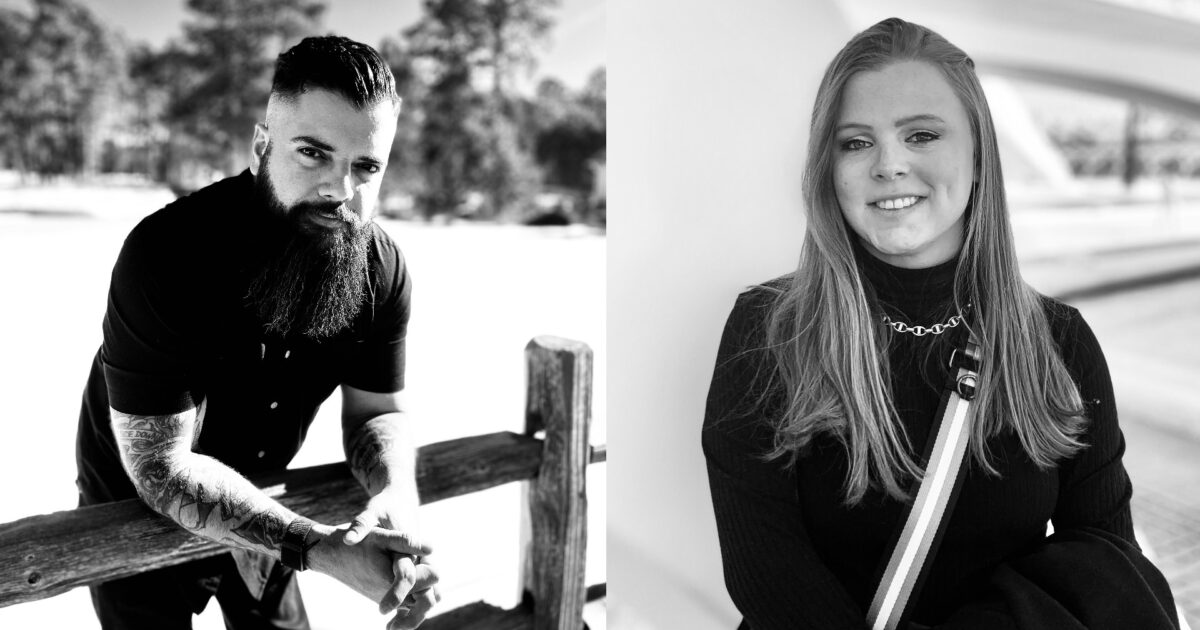 Photography had always been a part of Whitney Yeager’s life. She says her family is full of talented photographers, so she grew up around the camera. From 2007 to 2011 she worked as a professional photographer, and was also on the board of the Colorado Photographic Arts Center in Denver. But she says for years, she put photography on the backburner to focus on becoming a full time teacher.

Now, for the first time in almost a decade, she’s returning to photography to create a new exhibition in honor of her son, Sam:  The Sammy Project, a portrait series highlighting the stories of individuals who’ve experienced struggles with mental health.

“I’ve circled back to it really as a way to heal from my grief of losing my son,” Yeager said.

Sam had had a lot going for him. He had friends. He was athletic. He had earned academic scholarships, and was pursuing a college degree. But he struggled with his mental health. Yeager now believes he suffered from emerging schizoaffective disorder, which caused Sam to experience episodes Yeager says were triggered by drugs or stress. On April 3, 2021, one of these psychotic episodes resulted in a police confrontation, and Sam was killed. He was 23.

“Had he felt comfortable asking for help, or even talking about it enough to acknowledge that he had psychological problems, or some emerging mental illness, I believe he would probably still be alive today,” Yeager said.

If you are experiencing mental health struggles, you can call:

Yeager says she’s the kind of person to lean into the hard edges of life. She hadn’t shied away from learning about what had happened to Sam, but had instead tried to learn everything she could, watching back bodycam footage, meeting with Sam’s friends, and researching different mental health conditions. Shortly after Sam’s death, Yeager’s longtime friend and fellow photographer Katy Tartakoff invited Yeager to do a show at Tartakoff’s downtown Denver gallery. Yeager saw it as an opportunity to lean in even further as a way to process her grief — and maybe help others heal, too.

“I thought this would be an appropriate way to help make the world a better place,” Yeager said. “This is a way to, hopefully, make sure this doesn’t happen again, or reduce the chances of it happening, just by raising awareness and making it socially acceptable to talk about —  that it’s okay not to be okay. And there are so many resources out there that help you.”

The Sammy Project will open in Denver one year after after Sam’s death.

Sponsored by the mental health nonprofit NAMI Colorado Springs and Redline’s Array Parity project, the exhibition aims to combat mental health stigma and demonstrate the power that comes from claiming your own story.

The photos are black and white portraits, most of them staged outdoors with the subjects gazing directly at the camera, washed in natural light. While many of the participants are people Yeager already knew, or who had been close with Sam, a few portraits included in the gallery, like the one above, are of participants recruited through social media or through NAMI’s network and live outside of Colorado. In those cases, because Yeager wasn’t present to take their portraits, she guided the participants on how to stage their photo.

Each image is accompanied by a short bio, written by each participant in their own voice. It was important to Yeager that the personal statements show that each individual’s struggle with mental health does not define them, but is one component of who they are. The first part of each statement describes who they are — their interests, age, hobbies, passions, occupations. In the second part, the participants explain how they manage their mental illness and how it appears in their lives — what it looks like, sounds like and feels like, and what works and doesn’t work to help them cope.

“The personal statements say so much, and are so honest and vulnerable and real,” Yeager said. “Spending two years in front of a computer screen like most of the world has, people want authenticity. They want connectedness. And I think that’s what this project offers, is just connecting with each other through our vulnerabilities.”

The individuals included in the series are all between the ages of 19 and 32. Yeager said she wanted to feature people 30 and younger.

“It’s important to reach the younger generation, because that’s where I think social change will really take place,” she said.

Sam’s own story is also featured in the exhibition: photos taken at various stages of his life, paired with a personal statement similar to the other participants’, written in the first person as if he himself had written it. Yeager said she, Sam’s father and their daughter each attempted to write a version of Sam’s statement. In the end, everyone agreed that it was their daughter’s version that best captured Sam’s personality.

“I wanted to make sure it was in his voice, and make sure that I had approval from people who knew him and loved him,” Yeager said. “Everybody agreed that that sounds like him, and that it’s probably something he would say.”

In the state of Colorado and nationwide, mental illness is a significant issue, and one that’s become even more prevalent during the pandemic.

A 2022 report by Mental Health America ranked U.S. states by adult mental health, based on factors like prevalence and access to treatment. Colorado is ranked 51st in the country, according to the report. It’s ranked 45th in overall prevalence of mental illness in adults and youth (indicating high prevalence), and 37th for mental health overall based on 15 different measures of both youth and adult mental health.

Yeager worries that part of the issue is stigma — that shame can lead people to stay silent about their struggles like Sam did.

“My son did not ask for help or seek psychological help, because he felt it was a weakness,” Yeager said. “He felt like he should be able to handle it on his own. And he couldn’t.”

She said she also felt shame as a parent by not knowing how to help her son, and that before he died she had been in denial about what Sam was going through.

“We should be able to talk about mental illness the same way we talk about diabetes, or high blood pressure, or any other ailment,” Yeager said. “We’re all human. We’re all experiencing different struggles.”

According to The American Psychiatric Association, stigma and discrimination can exacerbate symptoms of mental illness, and reduce an individual’s likelihood of getting treatment. A 2017 study from  University of Zurich, University of Ulm and BKH Günzburg found that mental illness patients with higher self-stigma — the internalization of negative stereotypes — saw poorer recovery after one or two years.

Yeager hopes that The Sammy Project will highlight the strength of the participants.

“The point is to show that it takes courage,” she said. “Actually, it’s the strongest thing you can do as a person to ask for help when you need it.”

Yeager said it’s “overwhelming” to see the project come together.

“I laid all the storyboards out, and all the pictures just this week, when everything came in. And I just got really emotional, you know, because it shows so much courage on the part of the participants to be involved in this project,” Yeager said. “I view the people in this project as being pioneers for social change. These people are so very brave to do what they’re doing. ”

Yeager says through The Sammy Project, she wants to help remove the shame around mental health.

After the gallery closes, Yeager hopes to continue work on The Sammy Project. She hopes to expand the project into a book, and is still looking for more photo subjects interested in sharing their stories.

The Sammy Project will be on display from Noon to 6 p.m. on Saturday, April. 2 at Katy Tartakoff’s Photo Gallery at 800 E. 19th Ave.

If you are experiencing mental health struggles, you can call:

This story has been updated to clarify that it was Yeager, Sam’s father and their daughter who drafted versions of Sam’s personal statement.