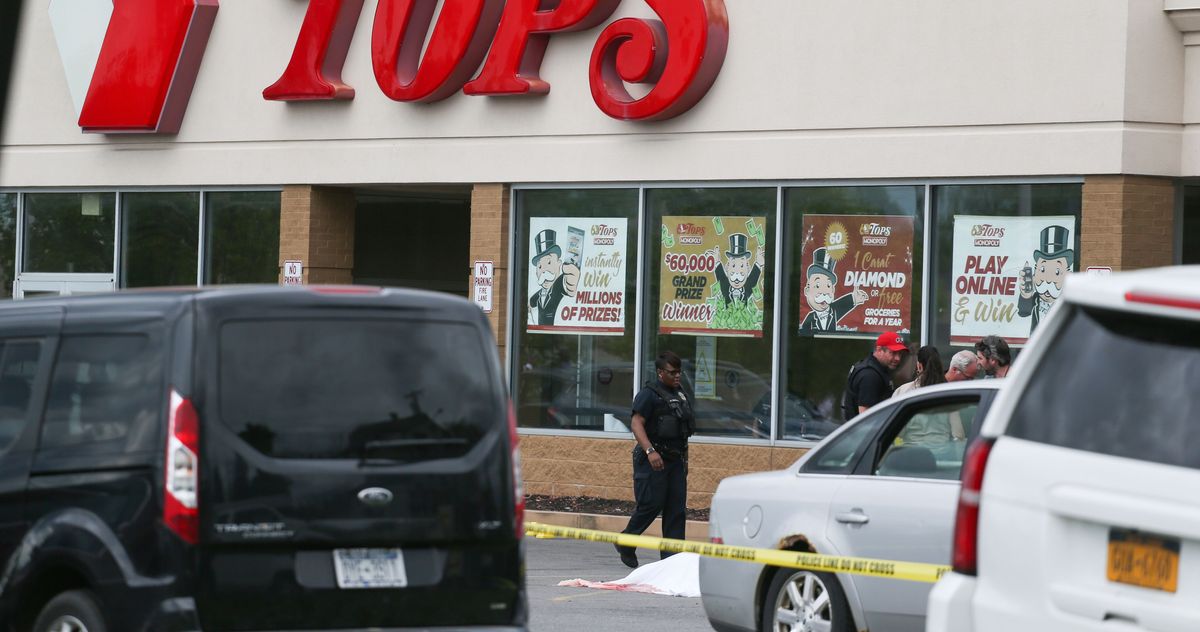 Police investigate a shooting at a Tops Friendly Market in Buffalo on Saturday.
Photo: Joshua Bessex/AP/Shutterstock

Ten people were killed and three wounded when a white gunman opened fire at a packed supermarket in a Black neighborhood of Buffalo, New York on Saturday afternoon. Police officials believe it was racially motivated hate crime. Below is everything we know about this developing story thus far.

Ten people were killed and three wounded, including two critically, when a 18-year-old white gunman opened fire in and outside of a Tops supermarket in a predominantly Black neighborhood of Buffalo, New York on Saturday afternoon. 11 of the 13 victims were Black and two were white. The gunman, Payton Gendron, was armed with a high-powered rifle, wore camouflage clothing, body armor, and a helmet equipped with a camera — which he used to livestream the attack, police said. He was later taken into custody after a brief standoff with police.

“This was pure evil. It was straight up a racially motivated hate crime from somebody outside of our community … coming into our community and trying to inflict that evil upon us,” Erie County Sheriff John Garcia said afterward at a news conference. “This is the worst nightmare that any community can face, and we are hurting and we are seething right now,” added Buffalo mayor Byron Brown.

Gendron targeted the Tops Friendly Market on Jefferson Avenue, roughly two miles north of downtown Buffalo — and about 200 miles from where Gendron lived in Conklin, New York. Police said the shooter drove up to the front of the supermarket and began opening fire on people in the parking lot while exiting his vehicle. He then went inside the store, where he continued shooting victims. A store employee who was able to escape through the supermarket’s back exit told the News that she thought she heard as many as 70 shots. The Buffalo News reports that four Tops employees were among those killed in the attack, including a recently retired Buffalo police officer who was working as a security guard at the supermarket. The guard was armed and fired at the gunman, but the bullets were stopped by his bulletproof vest.

After responding police officers confronted the shooter in the entrance of the store, he pointed his rifle at his chin. Officers then convinced him to drop the weapon, at which point he was tackled by police and taken into custody. There are unconfirmed reports that he posted a long racist manifesto online before carrying out the attack.

The Erie County DA’s office said that Gendron was later arraigned on murder charges at Buffalo City Court and remanded to custody without bail. His next court appearance is on Thursday. The gunman may face federal hate crime charges as well.

Governor and Buffalo native Kathy Hochul said during a Saturday night press briefing that “there is no depth to my outrage” over the attack. She also said that there were warning signs in the gunman’s social media activity that should have been flagged and provided to law enforcement, and criticized social media platforms for failing to do that. She specifically targeted white supremacy in her remarks, as well.

We must confront the threat that white supremacism poses to our society head-on.

I have directed the @nyspolice Hate Crimes Task Force to assist in the investigation of the heinous shooting in Buffalo today.

Tops Friendly Market, a regional chain of supermarkets, said in a statement that “We are shocked and deeply saddened by this senseless act of violence and our thoughts and prayers are with the victims and their families.”