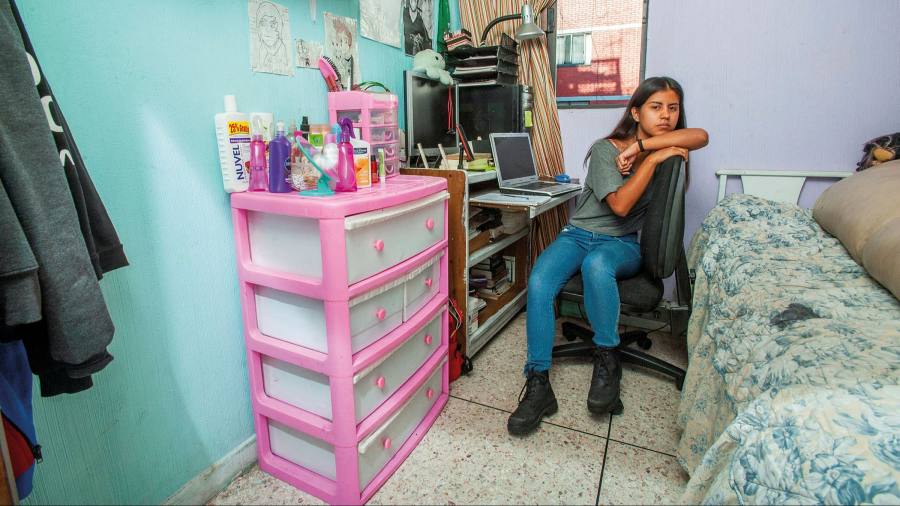 From the kitchen comes the whine of a blender. Then, in a corner of the living room, another starts whirring. Rosa María Ramírez Ramos grimaces. “With this noise, it’s hard to talk. Just imagine studying.”

Yet her 16-year-old daughter, Yolanda (pictured top), has had to do just that. Since February, Rosa’s eldest daughter, Andrea, has moved back into the 60 sq m flat with her partner, five-year-old son and the family’s food-delivery business after they were forced to close their Mexico City restaurant because of the pandemic.

As well as the five people, there is a dog and noise from the busy road outside. Yolanda’s bedroom is so chock full of her sister’s furniture that she barely has room to sit at her desk. She has to sleep in her mother’s bed.

Yolanda is in the final three years of school, known as preparatoria, but has felt tempted to give up. Mexico’s schools shut down in March 2020 as Covid-19 spread and most, like hers, which is affiliated to the National Autonomous University of Mexico (UNAM), and barely opened since, before resuming at the end of August.

“It’s been very difficult to learn anything,” says Yolanda, who struggled to focus during “tedious” 7am-1pm online classes. She had not met her teachers or her classmates in person because when she started prepa in August last year, schools were shut. “I’d like to stop studying till things get back to normal, but then I’d lose the year,” she says.

Yolanda used to be a determined, independent student, accustomed to getting on with her tasks on her own from an early age, while Rosa, a lawyer and single mother, worked late. “We called her Matilda,” Rosa laughs, referring to the Roald Dahl heroine who loved to read and learn.

But over the past few months, “I’d find her in bed with the quilt over her head — she just wasn’t interested,” Rosa says. “Sometimes she’d take the [food] orders down and I’d realise, ‘what about your lesson?’, and I’d go in and find the teacher on the computer talking to himself.”

Rosa’s frustration is familiar to many, yet she is lucky. Tania Esquivel, headteacher at the state-run Escuela Secundaria Técnica 19 Diego Rivera, located in a poor southern district of Mexico City, says on average only 40 per cent of students in the country have access to a computer, phone or tablet plus internet.

The government broadcasts lessons on television and via an internet stream under a scheme called Aprende en Casa (Learn From Home). But while the transmissions reached most parts of the country, they did not necessarily reach most homes, with many families lacking a TV, internet access or even an electricity supply. The administration defended the scheme in July, saying that the website had received more than 600m visits.

We’re a long way behind . . . Stem is not just nice to have, it’s a necessity now, for all students

“The government keeps reiterating that Learn From Home has been successful . . . and reached every single student,” says Alexandra Zapata, a private-sector researcher into education. “I’m scared that this narrative is really jeopardising what we’ll see in future.”

For Esquivel, trying to keep students engaged has been exhausting. “The most important thing for us was that the students didn’t drop out,” she says. “We managed to ensure that 94 per cent of the students handed in something, one way or another, to show there was some learning. But what they did learn was a long, long way from what we’d have hoped for.” The other 6 per cent proved impossible to contact. “We’ll see if they come back,” she says.

David Calderón, executive president of Mexicanos Primero, an education-focused non-profit, says Covid has piled pressure on an education system that was already struggling. “You could summarise these past [pandemic] months as: never have so many children learnt so little with such dire consequences,” he says.

Even before Covid-19, students in Mexico scored well below the OECD average in reading, maths and science, according to Pisa (the Programme for International Student Assessment) evaluations carried out every three years.

But the situation has taken a sharp turn for the worse during the pandemic. According to a recent study by Mexicanos Primero, 91 per cent of students in the fourth year of primary school could not solve a routine problem of how much change was left after buying items from a shop.

Worse still, only a quarter of students in the third year of secondary school, the last before preparatoria, could manage it. Still, the education ministry ruled that no student in primary or secondary education would fail the 2020-21 academic year. “The fact is that learning is not at the centre of education policy in Mexico,” Zapata says.

Initiatives to promote science, technology, engineering and maths (Stem) have largely been left to non-profits, rather than being made a core thrust of the curriculum. “We’re a long way behind and we’re falling further back,” says Alicia Lebrija, executive president of the Televisa foundation, which fosters Stem initiatives, including the Cuantrix and Tecnolochicas programmes. “Stem is not just nice to have, it’s a necessity now, for all students.”

Iván Meza, a professor of computer science at UNAM who helped set up a pioneering Mexico City government project to teach adolescents and adults to code, describes Covid as an “area of opportunity”. “We have to rethink how our education system will be in future,” he adds.

But President Andrés Manuel López Obrador has scrapped his predecessor’s education reforms, restoring the clout of powerful teachers’ unions, which resisted the reopening of schools until all teachers were vaccinated and the Covid risk was at a minimum.

Many schools have been vandalised and have had desks and chairs stolen during the closure. Even before the pandemic, thousands had no running water. “Zero money has been budgeted to provide soap and gel,” says Zapata.

Schools reopened at the end of August. Teachers were vaccinated with the Chinese CanSino jab — billed as a one-shot dose but now found to be less effective than expected, meaning recipients will need boosters. But the president stopped short of making school attendance compulsory.

Rosa’s five-year-old grandson, Gustavo, had three 20-minute Zoom lessons a week and quickly became so fed up that he had no desire to go back.

Zapata fears Covid-era students will become a “lost generation” and the handling of the pandemic in schools “is a tragedy that Mexico will pay for, for years and years and years to come”.