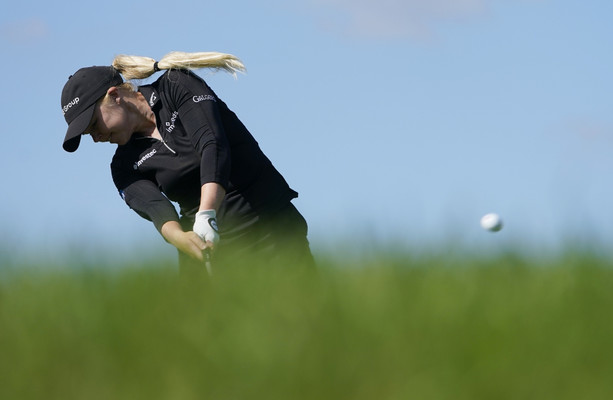 SATURDAY IS TRADITIONALLY golf’s moving day but unfortunately Stephanie Meadow moved in the wrong direction as she ended up in a tie for 70th place after the third round of the Cognizant Founders Cup.

Meadow shot a one-over round of 73 to follow from her opening round of 71 and second round of 72.

Knowing she needed to find form immediately if she was to climb the leaderboard, the Jordanstown golfer showed early intent, getting birdies on the par-5 second and the par-4 fifth.

That was when her putter went cold. She hit 10 out of 14 fairways, hit 13 out of 18 greens in regulation, but the mistakes began to pile up around the greens.

A bogey on seven stalled her momentum; a double bogey on 13 killed it stone dead.

At the other end of the leaderboard, Minjee Lee’s form also stalled today after her scintillating display yesterday.

Lee flirted with the best round on tour this season before settling for a 9-under 63 and a three-shot lead Friday at the halfway point of the event on that honors the 13 founding members of the women’s tour. The Australian had a 14-under 130 total at Upper Montclair Country Club. She had an eagle on 12 to move to 16-under thru 12 today and to hold a one-shot on-course lead.

“Hitting it close really helps you, just like I said before, really just frees you up,” said Lee. “Even with the short putts, it’s just like a little more confidence boost.”

Eighty players in the field of 144 made the cut at 1-under. Among those missing it were Marina Alex, the New Jersey native who won at Palos Verdes last month, Solheim Cup captain Stacy Lewis and Cavan’s Leona Maguire, who won this year at the LPGA Drive On Championship.