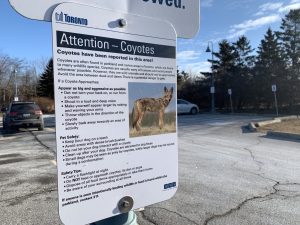 City of Toronto officials are once again urging residents to refrain from feeding wild coyotes after food was reportedly being left out in an Etobicoke park.

“Feeding coyotes and wild animals increases their presence and causes them to lose their fear of people, creating problems for both the wildlife and our neighbourhoods,” warns city officials in a statement released on Friday.

The city received more than 3,600 reports of coyote sightings in 2021. They say most sightings were the result of a “nearby regular food source” that was intentionally supplied by people.

Feeding the animals is against city bylaws and can result in a $365 fine.

“It is normal to see coyotes during winter, particularly near parks and ravines, as they are not hidden by foliage,” reads the release from city staff. “Coyote mating season also falls during January and February, leading to coyotes being more active and visible.”

In order to better ensure all encounters with the animals are safe, the city is urging residents to take the following precautions:

While the animals rarely pose any risk to humans they can pose a much greater danger to small pets. Anyone living near parks, ravines or anywhere else coyotes have been sighted are being advised to supervise their smaller pets at all times.

Back in November, residents in the Jane and Dundas area said coyotes were becoming a major problem in their neighbourhood after someone was reportedly leaving food out for the animals in a local schoolyard.

People in the area reported at least five coyotes that would roam the streets after dark, leaving residents afraid to walk alone at night, or walk their smaller dogs.

Police shot and killed a coyote at a North York schoolyard in November, it was believed to be the same animal that bit two people days earlier.

The Toronto Wildlife Centre issued a statement shortly after and said the lack of injuries of the two biting incidents “were typical of a fed coyote seeking more food.”

The charity encouraged residents in Toronto to contact city council and encourage expanding the ban of feeding wildlife beyond City-owned parks while also calling for similar moves in nearby municipalities.

A 10-year-old girl was chased by a coyote this past summer while on a walk with the family dog in a neighbourhood park near Warden Avenue and St. Clair Avenue East. The small dog suffered multiple bite wounds resulting from what evolved into a vicious attack.

Experts at the time said the coyotes comfort level around people grew as residents repeatedly fed him, ultimately getting “to the point where his behaviour was no longer considered acceptable by City officials.”

With files from Nick Westoll and Shauna Hunt