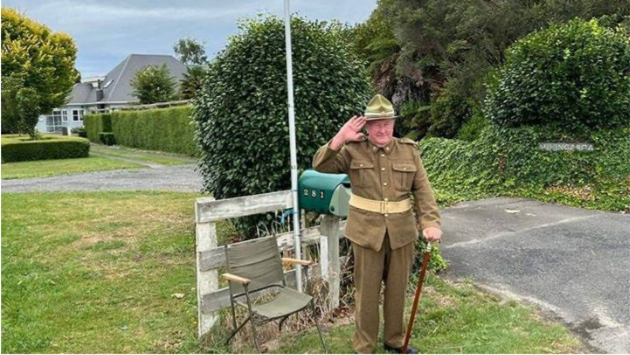 It’s an image that served as a rallying point for those protesting Covid-19 mitigation strategies – the endorsement of an “old soldier” who backed their opposition to the Government.

“Honoured salute from an Anzac veteran,” said one of many people to have posted the image in protest-related social media groups.

Another stated: “During the convoy this week WW2 veteran stands uniformed in the rain outside his gate for over an hour to salute a convoy of Kiwis driving across New Zealand in the name of freedom.”

But the man in uniform – Vernon Ballance of Whanganui – can now be revealed as having never served in the defence force.

A spokesman for the New Zealand Defence Force said: “The NZDF has no record or files of anyone named Vernon Ballance having ever served in any of the NZ Armed Forces.”

Ballance was photographed in the replica World War I tunic under a New Zealand flag outside his home north-west of Whanganui on State Highway 3 the weekend the protest at Parliament formed.

When the Herald on Sunday tracked Ballance down to ask about his service, Ballance denied over the phone being the man in uniform. When later confronted in person, Ballance – who accused the media of spreading lies – admitted he was the person wearing the uniform.

Photographs of Ballance in the uniform circulated on social media after he was photographed by a number of people driving from Taranaki and Whanganui to Wellington on February 7.

As the initial swell of people spread across Parliament’s grounds, the image of the uniformed older Kiwi saluting beneath a New Zealand flag captured the hearts and patriotism of many.

On Anzac Day, there was a fresh burst of social media activity with the photograph again being circulated.

Military memorabilia collector and dealer Shane Abercrombie said the uniform Ballance wore in the photographs was “a reproduction”.

He said the tunic was a New Zealand Army Service Corps uniform of the sort introduced in 1917. While it did see use through to 1940 “he’s basically wearing a World War I pattern”.

Abercrombie said the trousers “are probably incorrect” and appeared to be from the 1950s.

Whanganui RSA president Rod Hart didn’t recognise Ballance as someone who had been a member of the organisation. He said the drill cane with which Ballance posed didn’t fit with the uniform. It was used by a warrant officer and Ballance’s uniform carried no insignia denoting rank.

Both Hart and a former NZ Army staff sergeant were dismissive of the salute shown in the photograph. “Slack”, Hart described it, while the staff sergeant said a soldier showing such would have been marched off a parade ground.

When Ballance was contacted he did not acknowledge he was the man photographed: “Ah, the old soldier,” he said.

“He still lives but he doesn’t want to talk to the press.”

Ballance said the “old soldier” considered the media “paid lackeys as a result of payments made to them”. “He doesn’t want to talk to the political wing of the Labour Party.”

Asked if the soldier was a veteran, Ballance said: “Not from the discussions we have had.” As to why he was wearing a uniform, he said: “He’s showing support for the movement. I’m not entirely aware of all his reasoning.”

When Ballance was visited in person, he was clearly the same man as in the photograph, which he conceded. He said he had also searched out and seen the image on “Faeces Book”.

He said he wouldn’t participate in an interview that was a “hatchet job” and that people’s belief he was a veteran “is nothing to do with me”.