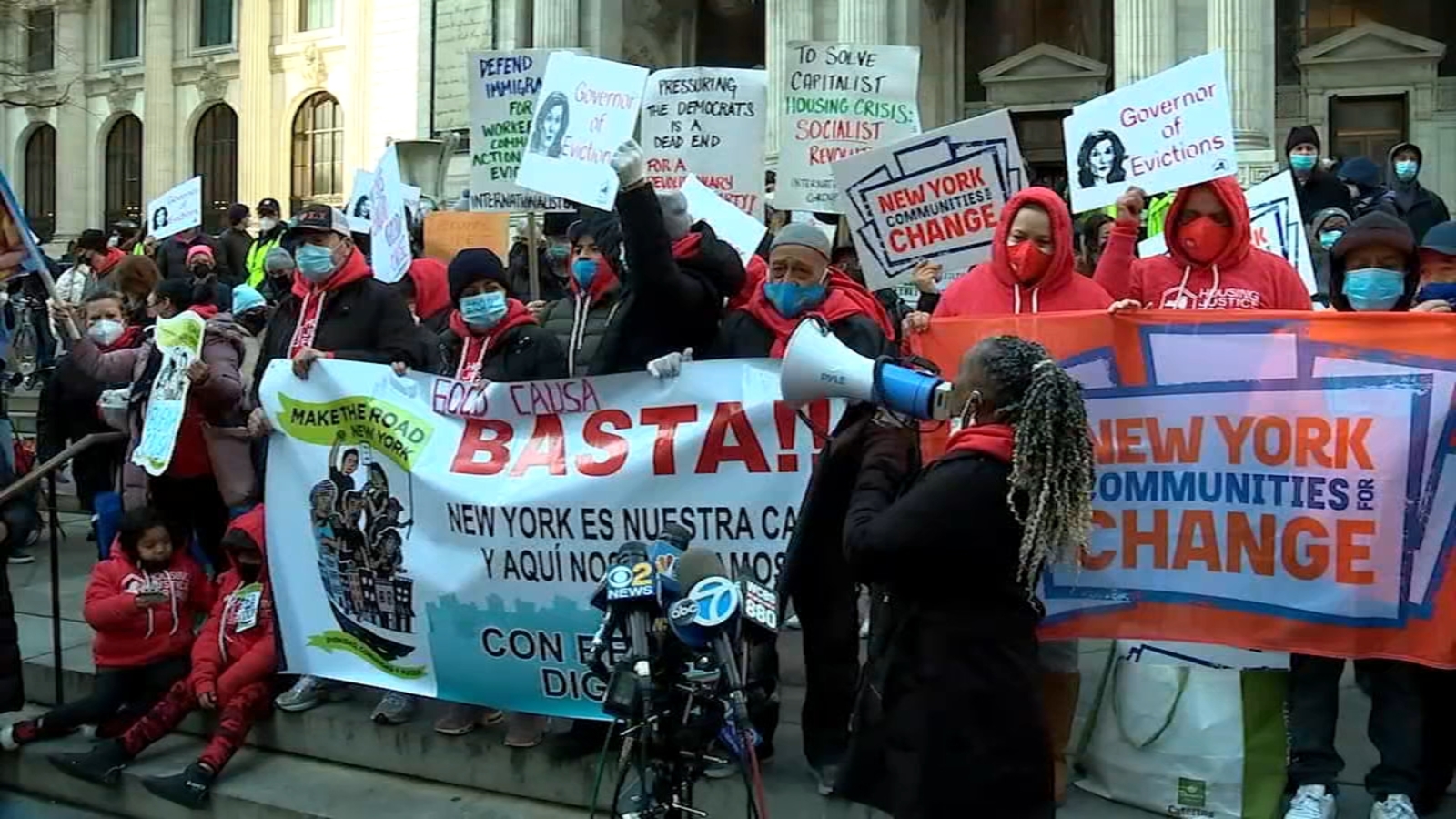 Tenants’ rights advocates rallied on the steps of the New York Public Library a day before the moratorium officially expired, asking for federal relief for families still struggling amid the pandemic.

“We’re here today fighting to get our electeds to pay attention and understand and we’re going to keep fighting until they take action,” said Jarrod McFarlane, Housing Justice for All.

Some 100 protesters joined city leaders on Friday asking Gov. Kathy Hochul for another extension to the eviction moratorium until the end of June.

“Our governor and our assembly have decided to take the week off, and we think it’s unconscionable in a week when so many New Yorkers are facing being unhoused, and that’s what we’re here today to represent,” McFarlane said.

They also want to keep the Emergency Rental Assistance Program open until the state gets the money needed to pay off all debts, pass a Good Cause Eviction Law, and expand New York State Right to Counsel.

The state Office of Temporary Disability Assistance reopened the application portal earlier this week, even though the state doesn’t have enough money to provide any more rent relief, absent a deluge of federal funding.

Applicants get protection from eviction while the state reviews their application.

Some impassioned protestors were arrested at Friday’s event, but the vast majority remained peaceful.

A state judge last week ordered New York to reopen the application portal for now, as the court considers a lawsuit filed by tenants and the Legal Aid Society.

Tenant advocates say it’s unfair for the state government to leave thousands of still-struggling New Yorkers without eviction protections, particularly as the eviction ban is about to end Saturday.

“The Center for NYC Neighborhoods is deeply concerned about the expiration of the statewide foreclosure and eviction moratorium on Saturday, Jan. 15,” CEO and Executive Director Christie Peale said in a statement. “The reality is that too many homeowners and renters remain dangerously close to losing their homes nearly two years since the COVID-19 pandemic first upended New York and its residents. The moratorium has been a critical source of stability for New Yorkers facing foreclosure or eviction, especially for Black and Brown and lower- to middle-income families who have been disproportionately affected by the pandemic. We hope that New York will extend the moratorium, so we can ensure a more equitable recovery for all New Yorkers. Homeowners who are in distress can contact the Attorney General’s Homeowner Protection Program (HOPP) to get free assistance from community-based housing counselors or legal service providers. Visit HomeownerHelpNY.org or call 1-855-HOME-456.

Lawyers for Hochul’s administration have argued it’s wrong to offer false hope to applicants whose landlords won’t receive rent relief without more aid from Washington. Hochul made clear that she plans to let the eviction moratorium expire.

“What we want to do is let people know that is concluding, very shortly,” she said. “I’m having conversations with the Legislature on what to do.”

She said New York extended its eviction moratorium last fall even as other states let theirs end, and that she and other governors, including from California, will again ask the federal government for more assistance.

Lawmakers are considering other ways to help tenants, including legislation that would make it much harder for landlords to evict tenants.

New York has spent about half of $2.4 billion in federal funding for emergency rent relief. Much of the remainder has yet to reach landlords because, according to the state, it’s having trouble contacting landlords and tenants.

“I want to echo the call by Governor Hochul and the New York Congressional delegations, urging the federal treasury department to make an immediate increase in the federal aid relief program,” Adams said.

New York is set to receive just $27 million in extra federal rent aid – a sliver of the nearly $1 billion Hochul sought last fall. Adams called the amount received so far “insulting,” noting that the city has the highest rent in the nation and the average city resident spends 50% of their income on rent.

“I know what it is to live on the verge of homelessness,” Adams said. “We are about to face another crisis around housing in our city.”

Manhattan Borough President Mark Levine is reminding New Yorkers about the city’s Right to Counsel law, which guarantees free “legal services for tenants who are subject to eviction.”

“We’re going to need now, at this moment, to fully activate the Right to Counsel law,” he said. “I want to make sure no case goes forward now, no matter how big the avalanche of evictions, that zero cases move unless they have an attorney.”

That free attorney for eviction court can be requested by calling 311.

“We have never faced the level of evictions that may be awaiting us after this moratorium is lifted,” Levine said. “We potentially could face tens of thousands of evictions.”

(The Associated Press contributed to this report)

Submit a News Tip or Question