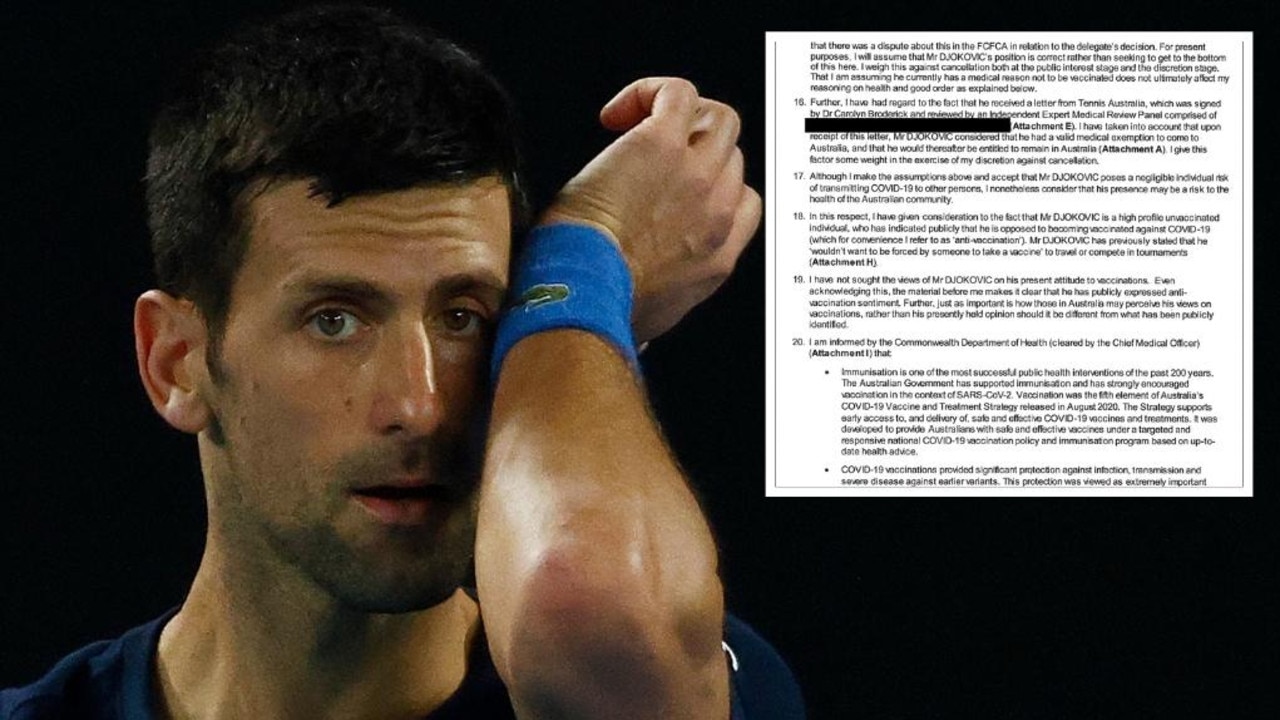 Novak Djokovic has sought and obtained an urgent injunction to prevent the government from deporting him following Friday’s decision by Immigration Minister Alex Hawke to cancel his visa.

During a hastily scheduled late-night hearing in the Federal Circuit Court on Friday, Judge Anthony Kelly ordered that the federal government not take any steps to remove Djokovic from Australia before the tennis star’s appeal is resolved.

Djokovic attended an interview with federal officials at 8am this morning before he was detained by Australian border authorities.

Judge Kelly said the case would be transferred to the Federal Court of Australia, which was confirmed in Justice David O‘Callaghan’s procedural hearing on Saturday morning.

The final hearing will commence at 9.30am AEDT tomorrow – less than 24 hours before the Australian Open gets underway.

World No. 1 Novak Djokovic has been detained by Australian border authorities after his visa was cancelled for a second time.

The 34-year-old is expected to spend Saturday night in pre-immigration detention.

“There is evidence to suggest that Mr Djokovic has, in the past, shown an apparent disregard for the need to isolate following the receipt of a positive Covid-19 test result.

“Given Mr Djokovic’s high profile status and position as a role model in the sporting and broader community, his ongoing presence in Australia may foster similar disregard for the precautionary requirements following receipt of a positive COVID-19 test in Australia. In particular, his behaviour may encourage or influence others to emulate his prior conduct and fail to comply with appropriate public health measures following a positive COVID-19 test result, which itself could lead to the transmission of the disease and serious risk to their health and others.”

Djokovic this week admitted he had gone out in public and attended a media interview with the French publication L’Equipe after testing positive for Covid in Serbia. Mr Hawke cites that conduct to bolster his argument.

The argument Border Force officials used to rescind Djokovic’s visa the first time – that his recent Covid infection in mid-December was insufficient to earn him an exemption to the requirement that incoming travellers be vaccinated against Covid – has been abandoned.

The procedural hearing dealt with confirming Judge Kelly’s order to transfer the case from the Federal Circuit Court to the higher Federal Court. It also confirmed the timeline for the two sides to file their submissions, and the logistics for Sunday’s final hearing, which will commence at 9.30am AEDT tomorrow.

There was a brief dispute over whether the final hearing will be before the full court or Justice O‘Callaghan alone – Djokovic’s team wanted a panel of three justices, while the Federal Government called for just the one.

The government‘s argument was that holding the hearing before the full court would preclude any subsequent appeal of the court’s decision.

Justice O‘Callaghan said the two sides will be informed whether they’ll face the full court or not later today.

The doctor widely credited with helping Novak Djokovic to reach the pinnacle of tennis has criticised Australia for twice cancelling the Serbian star’s visa and detaining him over Covid technicalities, saying he is “super healthy”.

“It’s absurd that somebody who has optimal health is a threat to the health of the public,” Dr Igor Cetojevic, a Bosnian-born Serb who lives in Cyprus, told AFP.

Djokovic, an avowed Covid-19 vaccine sceptic, is the Australian Open’s top seed and had been practising on the Melbourne Park courts just hours before Immigration Minister Alex Hawke’s bombshell decision was announced.

Cetojevic, who spent a year on tour with Djokovic until 2011, when he won Wimbledon for the first time and became world number one, said the unvaccinated Serb was being treated unfairly.

“How can a super healthy guy be a threat for the Australian Open,” the 60-year-old doctor said, laughing out loud.

“It’s all politics, it starts with politics, not anything else.”

Serbian President Aleksandar Vucic has accused Australia of “mistreating” Novak Djokovic after authorities revoked his visa for a second time.

“Why are you mistreating him, why are you taking it out not only on him but also on his family and the whole nation,” Mr Vucic wrote on social media.

“If you wanted to ban Novak Djokovic from winning the 10th trophy in Melbourne why didn’t you return him immediately, why didn’t you tell him ‘it is impossible to obtain a visa’?

Former world number one Andy Murray reached his first final since 2019 on Friday in a massive boost to his confidence ahead of the Australian Open.

The 34-year-old three-time major winner, who underwent career-saving hip surgery, has now strung together four wins in a row for the first time since being crowned champion at Antwerp nearly three years ago.

But the Scot was left frustrated by a number of questions in his post-match press conference on the topic of rival Novak Djokovic and the government’s decision to cancel his visa.

Murray – who twice addressed the Djokovic saga in press conferences this week – was left headbutting his microphone and could hardly speak through a series of deep sighs as he again was asked about the latest updates.

“Just want it obviously to get resolved, I think it would be good for everyone if that was the case. It just seems like it’s dragged on for quite a long time now,” Murray added.

“I understand that following careful consideration, action has been taken by the Minister to cancel Mr Djokovic’s visa held on health and good order grounds, on the basis that it was in the public interest to do so.

“This pandemic has been incredibly difficult for every Australian but we have stuck together and saved lives and livelihoods.

“Together we have achieved one of the lowest death rates, strongest economies and highest vaccination rates, in the world.

“Australians have made many sacrifices during this pandemic, and they rightly expect the result of those sacrifices to be protected.

“This is what the Minister is doing in taking this action today.

“Our strong border protection policies have kept Australians safe, prior to Covid and now during the pandemic.

“Due to the expected ongoing legal proceedings, I will be not be providing any further comment.”

– with AFP and Andrew McMurtry