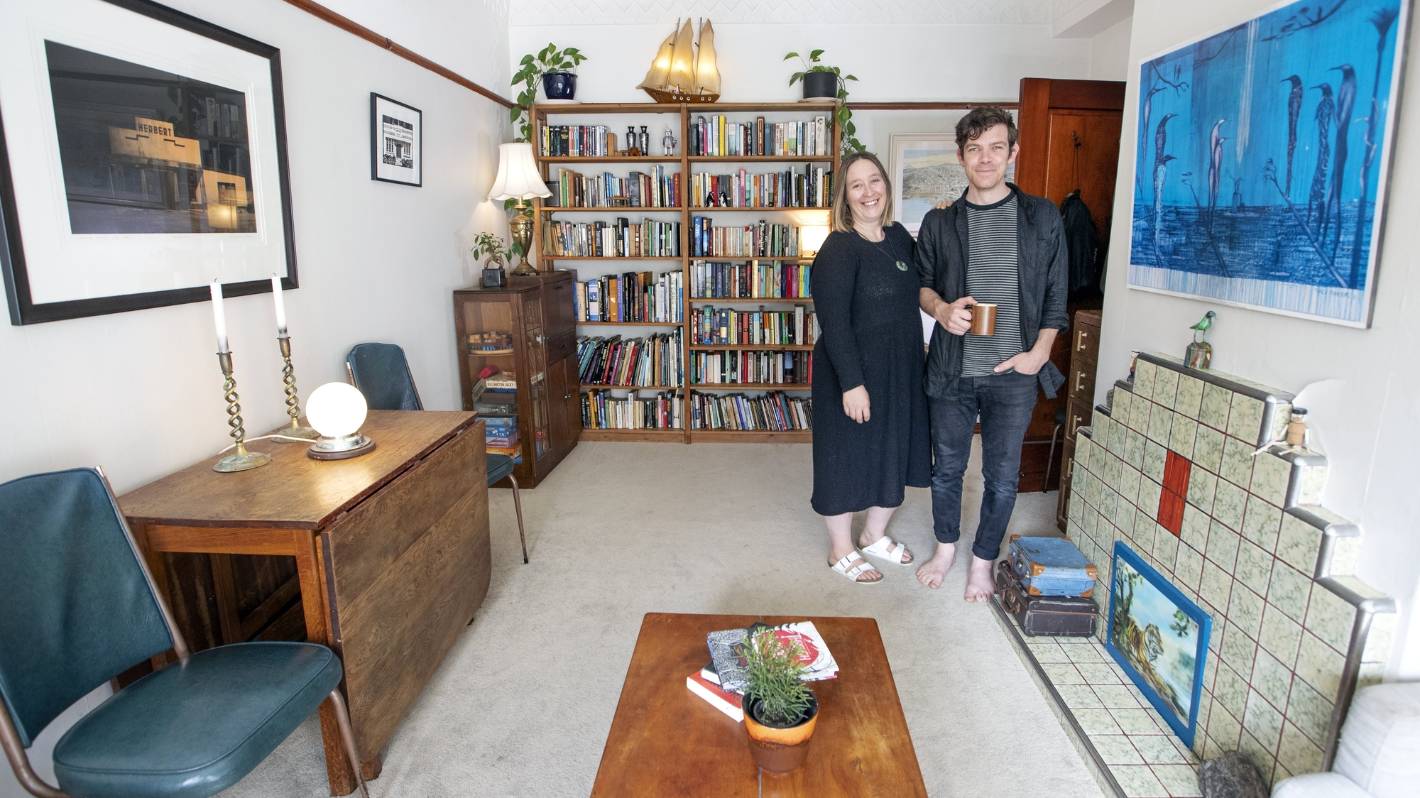 Ralph McCubbin Howell and Hannah Smith from award-winning theatre company Trick of the Light fill their central Wellington apartment with pieces from stage sets, op shop treasures, and lamps. A lot of lamps. As told to Mikaela Wilkes.

Hannah (H): We live on Maurice Terrace, and moved here in July 2019. Ralph’s parents own the apartment and rent it to us. We’re very lucky. Prior to that, we were in every manner of damp Aro Valley flat you can imagine.

Ralph (R): One of them was affectionately known as Tumble Down Scum Hole.

R: Is there enough space for the two of us to work from home? Well, we have a 2-year-old, so I don’t know what space would be big enough.

H: There is a garden though. It’s a shared garden for the building – but we probably make the most use of it. The building’s an old art deco place with “Ambassador Apt’s” lettered on the exterior – note the dodgy apostrophe.

R: We’re both from Te Waipounamu, originally. I grew up in a small town called Waikari, halfway between Christchurch and Hanmer Springs.

H: I came to Wellington for the Sheilah Winn Shakespeare Festival in school and just fell in love with it. I moved here, and never really left. But we lived in the UK for a couple of years, and until recently, were spending half the year touring and travelling in the UK, North America, and Australia.

R: We met in university, when we were both acting in a play (as a psychiatrist and a patient). I wouldn’t say either of us asked the other out. We eventually got drunk together on a night out and had a pash.

R: Our bookshelf has a bit of everything, really. We’ve got a whole heap of novels we’ve read over the years, and a solid whack of children’s fiction which we’ve treasured since childhood.

H: And lots of murder mysteries.

R: We do use the books for design inspiration. We’ve got really beautiful paper craft picture books, full of cut-outs and silhouettes. We love to play with shadows in our work.

H: The tiled wall is our ex-fireplace that now contains the water heater. The holographic tiger came from an op shop in Hamilton. It’s pretty glam. When we moved in, there was a blank piece of wood there blocking up the hole. To us, it looked like the perfect spot for a tiger.

H: The little blue suitcase is actually my school bag from kindy. It still has my name, age, and Auckland address written inside, but now contains toys that belong to our son.

R: The brown suitcase was gift from someone who came to one of our shows in South Africa. They said they’d found a quirky trunk that they thought we’d like, and we did.

A lot of things in our house have been part of shows. The downside to that is losing, say, the dining table for a tour.

H: All our houseplants went into the care of friends for six months while we were between houses. The hoya went to a professional gardener, and came back in a much, much better state than it had been in.

The tree on the office desk went to friend who was less of a gardener, and came back dead. We still love it, though.

R: When we’re working from home a lot of creation happens at that desk. I wrote the first draft of Lysander’s Aunty there, and then finished it on a bus heading into Athens, which felt fitting given it’s a play that riffs on A Midsummer Night’s Dream. More recently, I spent days there making creepy stop motion monsters from sand for our show The Griegol.

H: We spent a lot of time in St. Bathans, Otago, so the two prints on that wall are of familiar spots. The black and white is of the main street by the Vulcan Hotel, by Pauline Bellamy. The second is of Herbert on State Highway 1, between Christchurch and Dunedin, by Grahame Sydney. It’s a blink-and-you’ll-miss-it pit stop that we see every summer. I love that he’s got a photo-realist style, but has moved the outhouse building to the right-hand side for better composition. That’s not how it is in life.

H: I keep trying to get Ralph to get rid of those CDs. We’ve got no way of playing them, but no such luck.

The orange teapot was supposed to be a gift for a friend of ours who loves the colour. We stumbled on it in an op shop, but on our drive over, we decided we loved it so much that it had to come and live with us.

R: Those huge olive tins are actually our recycling system. A Greek wholefoods place in Miramar called Elysian Foods gave them away in exchange for a donation to charity.

R: We have an old printing box that now holds an assortment of strange trinkets.

H: My mum’s partner collects Cococubs, which were given away with tins of Cadbury’s cocoa in the 30s. These are all the old, slightly broken ones, or double ups that he didn’t want.

My favourite is the man with the bowler hat, who I’ve always thought looked like Orson Welles.

H: And mine is the broken totem, which is something my stepmother found from an archaeological dig in Dunedin on Hanover Street. It’s actually a tourist souvenir from Mexico, so it wouldn’t have been anything expensive, but it’s very old.

Trick of the Light’s Ralph McCubbin Howell and Hannah Smith are the writing and directing duo of Lysander’s Aunty or A most Rageful Irreverent Comedy Concerning an Off-stage Character from A Midsummer Night’s Dream, on 10 – 13 March at Wellington Opera House in the Aotearoa New Zealand Festival of the Arts, and 17 March – 3 April at ASB Waterfront Theatre in the Auckland Arts Festival. atc.co.nz

Their show The Griegol plays at Clarence Theatre for the Hamilton Gardens Arts Festival on February 19. www.hgaf.co.nz