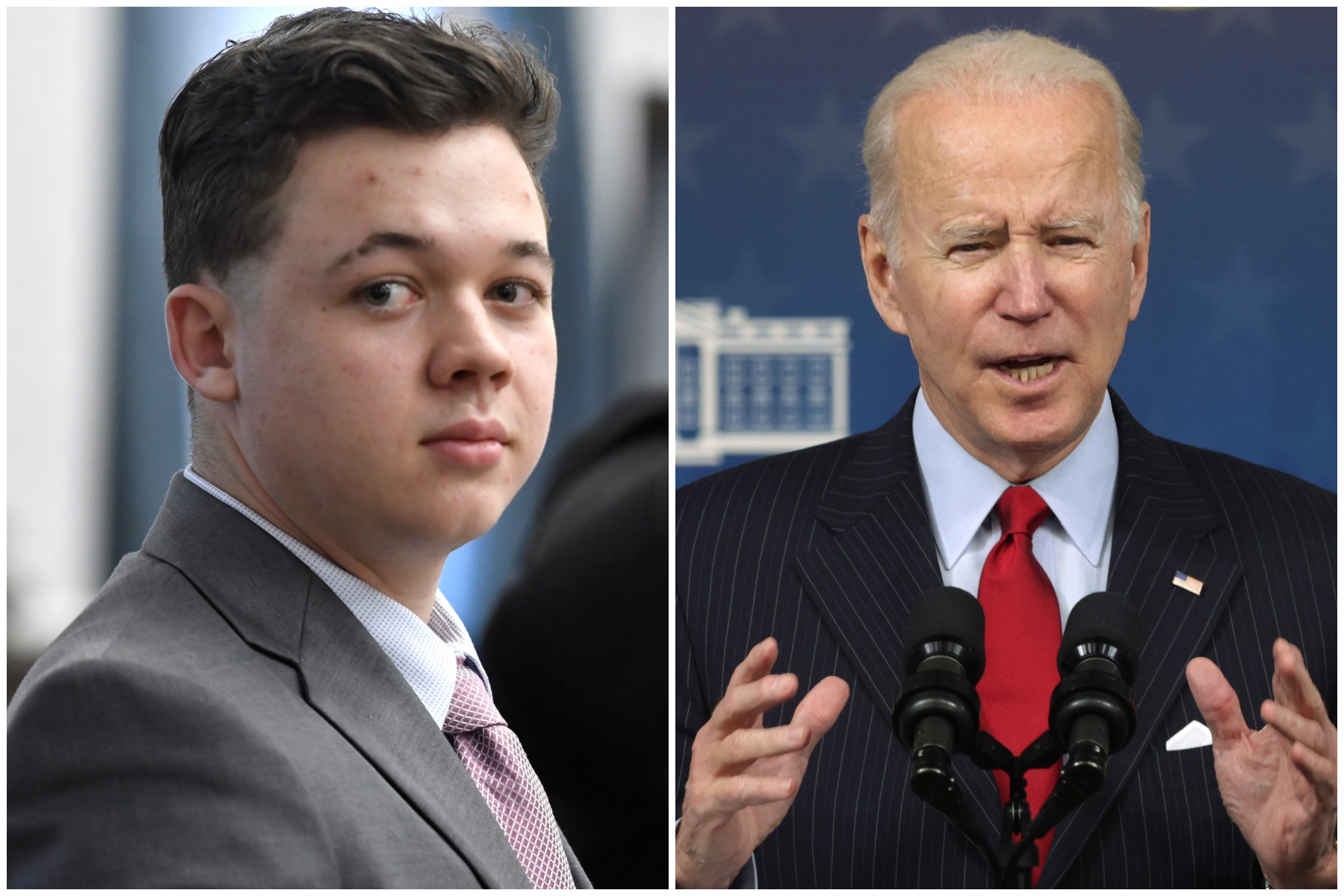 Experts have questioned if Kyle Rittenhouse could sue President Joe Biden over allegations he defamed his character following his homicide arrest.

Rittenhouse, who was cleared of all charges against him after killing Joseph Rosenbaum and Anthony Huber and injuring Gaige Grosskreutz in Kenosha last August, accused Biden of acting with “actual malice, defaming my character” after linking him to white supremacy in a tweet last September.

While Rittenhouse did not specifically state he intends to launch legal action against Biden during his interview with Fox News‘ Tucker Carlson, a number of conservative figures and attorneys suggested he has a case.

The tweet in question was posted by Biden before he was president.

The clip shows footage of the neo-Nazi rally in Charlottesville, Virginia, in 2017 and Trump telling the Proud Boys to “stand back and stand by” during a televised presidential debate in September 2020.

An image of Rittenhouse armed with a semiautomatic rifle taken from the Black Lives Matter protests in Kenosha was also included in the video.

Experts have now suggested that while Rittenhouse may have a case against Biden, it will be difficult to prove.

“Biden would not be able to use executive privilege as a defense against a defamation lawsuit from Kyle Rittenhouse because Biden was not an elected official when he made those remarks,” Rahmani said.

“He was campaigning for president and campaigning is not considered to be acting in one’s official capacity as an elected leader.”

Why a Lawsuit Against Biden is Unlikely to Succeed

Barbara McQuade, a University of Michigan law professor and former U.S. attorney in Detroit, told Newsweek it is “not a serious claim” that Rittenhouse could sue Biden for defamation based on the video.

“First, it is very unlikely that the person who created the ad or tweeted it was Biden himself. Any lawsuit would need to be filed against the person or people who published it,” McQuade said.

“Second, a defamation case is unlikely to succeed here against any defendant. By inserting himself into the civil unrest in Kenosha, Rittenhouse voluntarily became a limited purpose public figure, which subjects defamation claims against him to the actual malice standard.”

McQuade said in order for Rittenhouse to win a defamation suit, he would have to prove that the person who included the image of Rittenhouse in Biden’s video either knew that it was false or “acted with reckless disregard as to its truth.”

She added that Rittenhouse must also show it is false that he is a white supremacist or militia member—something which was long denied by his lawyers, who state there is no evidence to he has any links to the far-right.

Rahmani suggested that Biden’s team may try to get the case thrown out because the connection between his tweet saying Trump should denounce white supremacists and the picture of Rittenhouse is “attenuated.”

“If a judge denies the motion to dismiss, then Rittenhouse’s past dealings become relevant because truth is an absolute defense to defamation,” Rahmani said.

“Rittenhouse would have to be absolutely sure there are no skeletons in his closet before filing, including any social media posts or communications with friends and family.”

Rahmani said the photos of Rittenhouse posing with Proud Boys at a bar in Wisconsin while flashing an OK hand gesture, a symbol that has been co-opted by the far-right as a sign to show support for white supremacy, may be used against Rittenhouse in a civil case.

Prior to his murder trial, Kenosha County Circuit Judge Bruce Schroeder said the the prosecution could not attempt to make any links between Rittenhouse and the Proud Boys during proceedings.

While militia groups were found to have actively encouraged violence at the Kenosha protest, Facebook previously confirmed they found no evidence that Rittenhouse followed or was invited to any of the pages.

Kyle Rittenhouse Has a Better Case Against Ayanna Pressley

Rahmani said that Rittenhouse will have a better chance of successfully suing Massachusetts congresswoman Ayanna Pressley after she not only accused Rittenhouse of being a “white supremacist” but also a “domestic terrorist” in the wake of the Kenosha shootings, adding there is “no evidence” to suggest this.

Rep. Marjorie Taylor Greene was one of those who said that Pressley should apologize for her remarks after Rittenhouse was found not guilty of the charges against him.

On Tuesday, White House press secretary Jen Psaki refused to say whether Biden should apologize for linking Rittenhouse for white supremacy, or for falsely suggesting he was “part of a militia coming out of Illinois.”

“The President believes in condemning hatred, division, and violence. That’s exactly what was done in that video.”