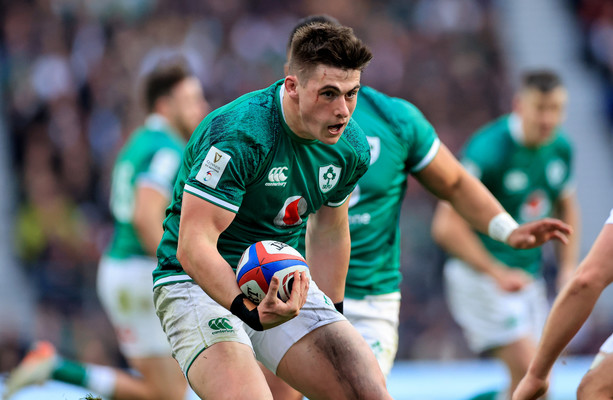 THERE WAS STRONG interest from Munster and some people might have felt that Dan Sheehan would have been better off leaving Leinster.

He has been battling with Rónan Kelleher for the number two shirt at Leinster in recent seasons, so it would have been understandable if Sheehan thought a move south would have left him in position to play more minutes over the coming seasons.

But Sheehan didn’t have to consider things for very long before re-signing with Leinster through until the summer of 2024. The 23-year-old had to work very hard to break into the senior set-up in the first place and he has no intention of giving up that spot now.

“I knew even from last year that it would be naive to go chasing other clubs or trying to become a superhero somewhere else,” says Sheehan, who starts at hooker for Leinster against Connacht tonight in Kelleher’s injury-enforced absence.

“I think the set-up Leinster have of developing young players has proven itself over the years. Like Ports [Andrew Porter] and Tadhg [Furlong], I know they’ve swapped now, but both of them made the Lions in the same position last year, so I don’t think there was any looking at any other club.”

Indeed, the presence of Kelleher hasn’t stopped Sheehan from advancing his international career. He made his debut for Ireland last November and then, with Kelleher sidelined, Sheehan started the last three games of this year’s Six Nations.

Sheehan’s outstanding form over the past two seasons has made him impossible to ignore and having felt on the brink of being let go by Leinster only a few years ago, the contracting process was much smoother this time around.

“It was nice this time,” he says with a smile. “I guess absolutely delighted to stay on.

Sheehan has been brilliant for Leinster.

“I think Leinster is the best place for me, for sure. Like there’s obviously those talks of, ‘Are you better to move if you’re number two?’ but I think the way Leinster play and the position I’m in working with Rónan, I think we both feed off each other and we both get sufficient game time and have impact on the game.

“I think the way we train here, I don’t think there was any point in trying to move. It’s going well the way it is and I’ve been able to do everything so far that I’ve wanted to in the position I’m in. So I’m happy.”

Sheehan is feeling very comfortable in his own skin in Leinster, while he has made great progress on the Test scene too.

There has been a huge amount to learn along the way, particularly in big outings away to France and England in the Six Nations.

“Whether it’s a clearout or a sloppy offside penalty, these things cost you three points and three points is a huge amount in Test rugby. And then also in European rugby, a focus will be on discipline and making sure that we don’t give any team any easy ‘ins’ into our 22 or an easy go at the sticks.”

Among the lessons during the Six Nations was the scrum in Twickenham, where Ireland gave up repeated penalties and momentum in their win over England.

“I think I was extremely lucky to have that experience,” says Sheehan. “That was probably the first experience where it was error-on-error-on-error. I personally probably didn’t manage it well enough.

“Whether it was my comms with the ref or just being able to put a plan in place in the moment rather than after the game looking at it. 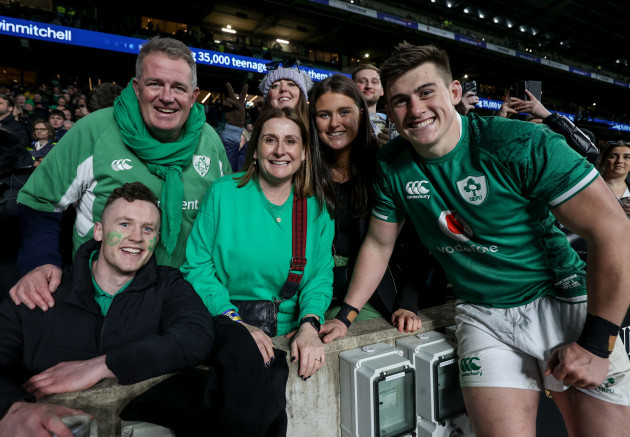 Sheehan with his family at Twickenham.

“So, to be honest, I’m really glad it happened in that game where we came away with the win, it was a bit of a dampener but I think the learnings from it have added a huge amount of ability to problem-solve on the go and not let things reoccur.”

The highlights in Sheehan’s play have spoken for themselves, whether he has been side-stepping wings, running over defenders, offloading, hammering ball-carriers in the tackle, or scoring tries along the way.

His family have delighted in his rise, including his younger brother, Bobby, who is also a hooker and a key man for UCD.

“My mum and my two sisters are a big part of it but then my dad and my brother – we’re 18 months apart, we’ve played Clongowes all the way up,” says Sheehan. “When we were abroad [living in Romania] it was just us two kicking a ball or whatever.

“So I really enjoy going up to watch his games in the AIL, something he likes a lot. Yeah, they have been a massive part. It’s always been a talking point in our family, rugby, so it’s good to keep the interest going.”