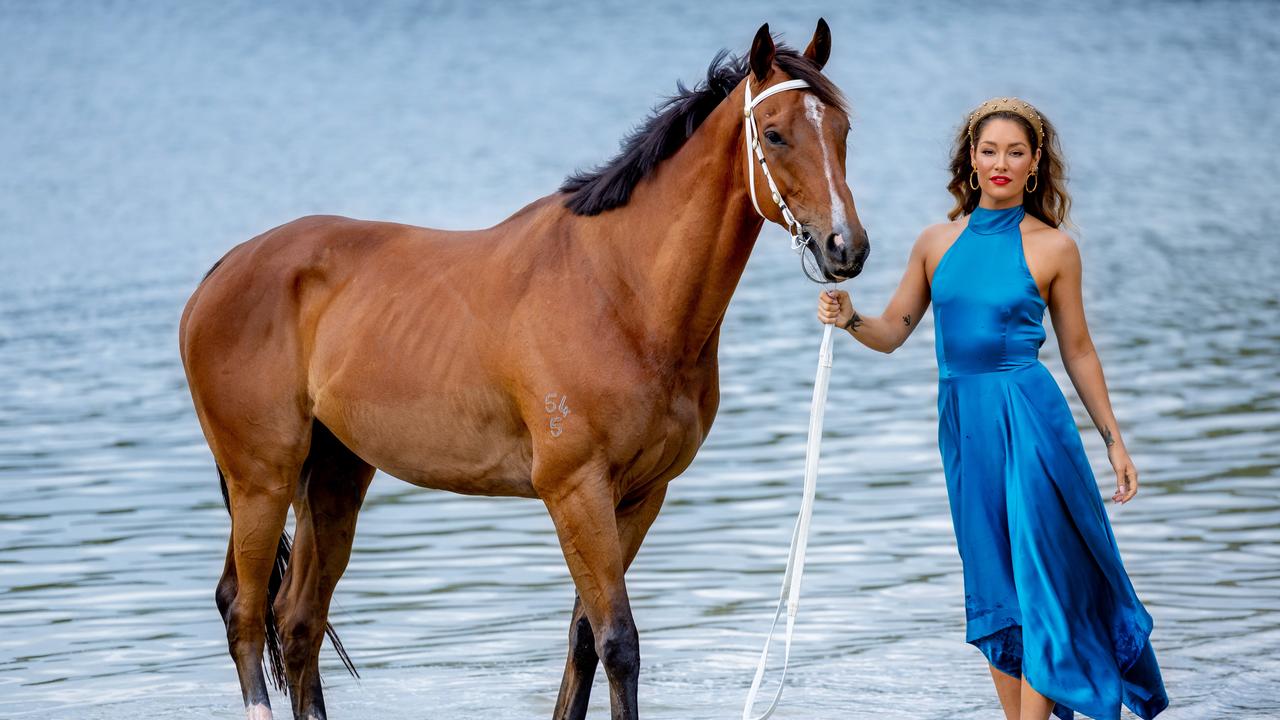 SAS Australia contestant and model Erin McNaught met her match in the form of retired racehorse Dustin ahead of the $10 million Magic Millions horse race on Saturday.

Nothing she faced on SAS Australia prepared model Erin McNaught for her encounter on the water’s edge with Dustin the retired racehorse.

“As I approached him for the first time the wind caught my dress and it startled him,” McNaught, 39 said.

“From then on he did not like my dress.”

The former racehorse, who raced under the name Fields of Yulong for Winx trainer Chris Waller, appeared set against her blue Sass and Bide dress.

“I had to be quite stern with him but he came around,” she said.

Being involved in the Magic Millions Carnival as an ambassador for The Star Gold Coast has taken McNaught back to her childhood horseriding roots.

“My best friend had a horse and we spent every weekend riding. I still give my parents stick for refusing to buy me a horse,” she said.

Despite that, she has not been tempted to attend the Magic Millions yearling sales where the top colts and fillies are fetching up to $1.9 million. The sales are tracking to top last year’s record $211 million gross by up to $20 million.

McNaught will on Saturday be attending the $10 million Magic Millions Race Day where she expects to “have a bit of a punt on the big races”.

However she will not be wearing the towering high heels that are the trademark of former Miss Universe contestants.

“I was on a bushwalk with my husband and just telling my son to slow down when I twisted my ankle,” she said.

“We were 500m down a steep gorge so I had to lean on my husband and hop all the way back to the top.”

Despite claiming her time on SAS Australia had “made me more of a wuss” than before, when she got to hospital she had torn several ligaments.

That will not stop her and her husband, the British rapper Example, from attending Saturday night’s after-party outside on the lawn at The Gardens at The Star. Their sons Evander, 7, and Ennio, 4, will be safely tucked up in bed.

The race day will see horses trained by Sydney trainers including Gai Waterhouse and Chris Waller and ridden by Sydney jockeys including Hugh Bowman and Tommy Berry racing for $2 million in prize money in the 2YO Classic and 3YO Guineas.

Magic Millions co-owner Gerry Harvey sold one of the starters in the 2YO, Sneaky Starter, when it was passed in for $15,000 at the sales last year only to see it compete for $2 million this year.