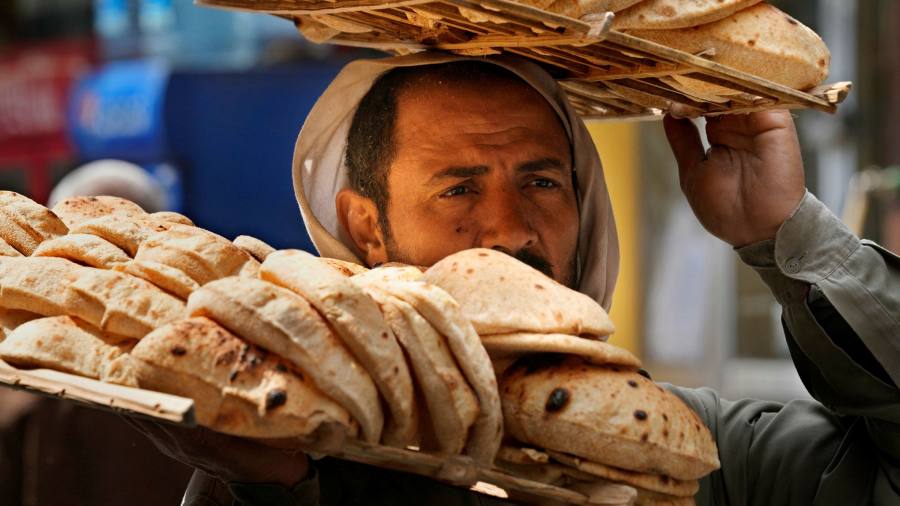 Egypt has asked for support from the IMF, the fund said, as the country struggles to weather the economic impact of Russia’s invasion on Ukraine.

Cairo is facing mounting pressures on its public finances as Moscow’s assault in Kyiv has sent grain prices soaring and increased the price of oil. Egypt is the world’s biggest wheat importer, is heavily reliant on supplies from Russia and Ukraine and has a subsidised bread programme which feeds 70mn people.

Its predicament underscores how the war is rippling into Arab and African states that rely on food and energy imports.

“The rapidly changing global environment and spillovers related to the war in Ukraine are posing important challenges for countries around the world, including Egypt,” said Celine Allard, IMF mission chief for Egypt in a statement released on Wednesday evening.

“In that context, the Egyptian authorities have requested the International Monetary Fund’s (IMF) support to implement their comprehensive economic programme.”

Egypt, the Arab world’s most populous nation, has benefited from previous IMF loans and programmes. In 2016 it secured a $12bn loan over three years after a crippling foreign currency crisis as it emerged from the political upheavals that followed its 2011 revolution.

It also received $8bn in 2020 to deal with the impact of the pandemic, making it one of the biggest borrowers from the fund after Argentina. At the time of the 2016 agreement it devalued the currency, which lost half its value against the dollar.

Analysts have been expecting this latest announcement after the country devalued its currency on Monday in a move seen as a prelude to discussions with the fund on a potential loan. Egypt also announced a package of tax breaks and increases in social spending worth $7bn.

The Egyptian pound has fallen 14 per cent against the dollar since Monday when the central bank allowed its value to slip, citing the role of exchange rate flexibility as a shock absorber. The dollar traded at E£18.4 on Monday up from E£15.66 on Sunday.

Goldman Sachs said the devaluation “smooths the path for an IMF programme which we believe will help anchor confidence in Egypt’s fiscal and reform trajectory”.

Allard’s statement welcomed the devaluation and the expansion of the social protection network and added that “continued exchange rate flexibility will be essential to absorb external shocks and safeguard financial buffers during this uncertain time. Prudent fiscal and monetary policies will also be needed to preserve macroeconomic stability.”

The war has also hit the country’s tourism, a main source of foreign currency, because it stopped the flow of visitors from Russian and Ukraine — both important markets for the sector.

Are you personally affected by the War in Ukraine? We want to hear from you

Are you from Ukraine? Do you have friends and family in or from Ukraine whose lives have been upended? Or perhaps you’re doing something to help those individuals, such as fundraising or housing people in your own homes. We want to hear from you. Tell us via a short survey.

Foreign debt investors have also pulled billions of dollars from Egypt in recent months, adding to pressure on its currency. “There were around $5bn of net outflows in September-December and further outflows accompanied news of the Ukraine conflict,” said Fitch Ratings agency in a note last week.

“In our view, these outflows reflect tighter global financial conditions, as well as investor concerns about Egypt’s external funding needs in the absence of an IMF programme, the impact of rising inflation on Egypt’s real interest rates, and the sustainability of Egypt’s exchange-rate level, after significant real appreciation in recent years.”