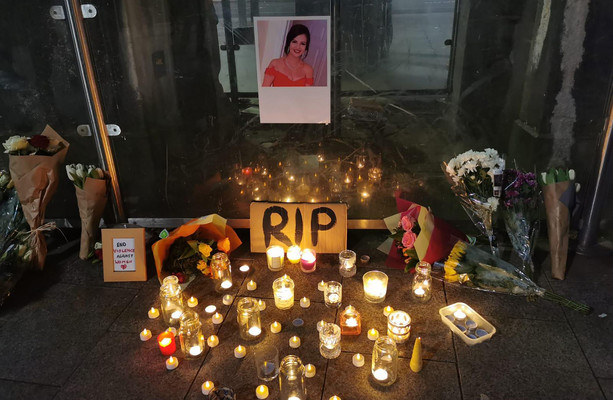 A NUMBER OF vigils are planned around Ireland today in memory of Ashling Murphy who was killed in Tullamore on Wednesday.

Ashling, a 23-year-old primary school teacher, was attacked along the canal bank way in Cappincur, to the east of the Co Offaly town, at around 4pm on Wednesday.

A 40-year-old man was arrested a short time after her body was discovered. He was questioned by gardaí but has since been released without charge. Gardaí said he is no longer a suspect.

Family friends and locals in Tullamore have spoken of their shock in the aftermath of the murder.

Several hundred people attended a vigil in Galway last night. Many in the crowd brought flowers and candles.

Tullamore, Dublin, Limerick and Belfast are among the locations where vigils have been arranged for today and over the next few days.

The National Women’s Council of Ireland (NWCI) said that wishing to reflect the “huge outpouring of grief” it will be holding a vigil outside Dáil Éireann for Ashling at 4pm today.

The NWCI has tweeted full details of vigils held in towns and cities across the country today and over the weekend.


Several vigils are planned for today, including:

Dozens of other vigils are planned for Saturday and Sunday around the country.

A vigil will be held in Cork at 9.30am tomorrow morning at the Atlantic Pond and at 4pm tomorrow in Dún Laoghaire at the seafront entrance to the People’s Park.

A vigil will also take place in London outside the London Irish Centre at 4pm tomorrow.