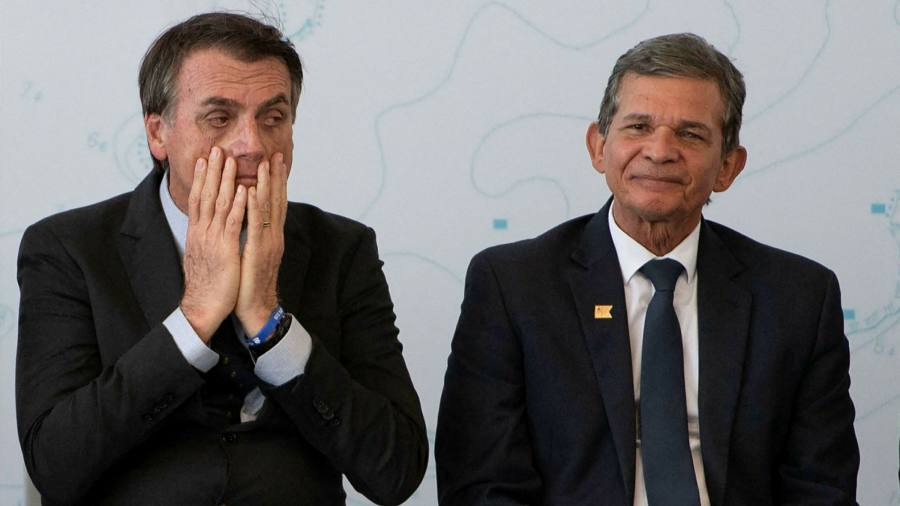 One year ago Jair Bolsonaro triggered a crisis at state-controlled energy group Petrobras by replacing its technocratic chief executive with a military officer. Now the future of the general appointed by the Brazilian president is increasingly in doubt.

With elections looming in October, the rightwing populist leader has in recent weeks lashed out at publicly listed Petrobras after it refused to cap rising petrol and diesel prices, a sore spot for voters.

A survey published by BTG Pactual this week found that one in three respondents blamed the government — a higher proportion than those who held responsible other factors such as Petrobras or the war in Ukraine — for the increase in fuel costs. At the pumps diesel has soared by a quarter and petrol by 10 per cent since the start of this year alone, hurting living standards, particularly in poorer communities.

Bolsonaro trails in the polls to leftwing rival Luiz Inácio Lula da Silva, an outspoken proponent of holding down fuel prices. Many expect the Brazilian leader will address the issue either by removing General Joaquim Silva e Luna as Petrobras chief and installing a more pliant replacement, or by using his presidential powers to create a fuel subsidy programme.

Both options carry potential risks to Brazil’s largest company and to the wider economy. When Silva e Luna was nominated last year, Petrobras’s São Paulo-listed stock fell 21 per cent and Brazil’s currency slid against the dollar amid fears the government would intervene in the company’s pricing policy, which tracks international markets for domestic fuel rates.

However, Silva e Luna has so far resisted the pressure, leading to the discussion in the government of who could replace him.

“In Brazil, the issue of fuel prices is always a political issue. It has always been throughout Petrobras’s history,” said Roberto Castello Branco, who was in effect fired as chief executive by Bolsonaro last year.

“There’s a risk that Petrobras will suffer severe losses from any intervention in prices,” he said, which would have “negative repercussions on the Brazilian economy. This is in addition to the short-term repercussions, which happen in the stock market, in the exchange rate, in interest rates.”

Cláudio Porto, founder of energy consultancy Macroplan, envisages two scenarios. The first is a “symbolic exchange” where Silva e Luna is replaced but the pricing policy maintained. In the other, the general is removed and the company’s messaging and pricing policy overhauled.

“In this case, the impact on the stock market will be longer with a loss of value for Petrobras. As long as Petrobras is state controlled, it will be attacked throughout the cycle electoral campaign,” he said.

For his part, Silva e Luna has so far refused to back down. “The battlefield is my comfort zone,” he told Reuters. “I do not run away from it. A man’s gotta do what a man’s gotta do.”

His focus on shareholder value, however, is likely to come under sustained pressure in the coming weeks, with politicians across the spectrum united against him.

Like Bolsonaro, Lula has questioned the practice of adjusting domestic fuel prices in line with global dollar rates. The leftist, who served as president between 2003 and 2010, has vowed to “Brazilianise Petrobras’s prices” if he wins the election. Rodrigo Pacheco, the president of the Senate, said Petrobras had a “social function” to reduce the impact of fuel prices.

Yet to some observers, the rhetoric is little more than political posturing. A corporate governance overhaul of Petrobras following its involvement in the years-long Car Wash corruption scandal, along with other legal reforms, means it is now more difficult for management and the government to act in a way that would damage the business.

“The bylaws of the company were improved significantly, not allowing employees or any directors or executives to do anything that financially harms the company. These people can be personally liable,” said Luiz Carvalho, an analyst with UBS.

Silva e Luna’s fate is likely to be decided at a special shareholder meeting of Petrobras in mid-April. His current term is scheduled to run to next February, although he could be ousted before then if the government removes his name from a list to make up the company’s board. The chief executive has to be a board member, according to corporate statutes.

To deal with surging fuel prices the government could also create a specific subsidy. Paulo Guedes, the finance minister, said this month that the government was studying that possibility, having already reduced a series of government taxes on fuel.

But critics argue that the impact of a subsidy would be unlikely to reach Brazil’s most needy, who tend not to own vehicles, and the programme would instead amount to better margins for businesspeople in the fuel supply chain.

They also point out that the government is already limited in what it can do, given legal constraints on spending in an election year.

“Many claim that the creation of a specific subsidy programme or a social programme would be classified as an electoral crime,” said Adriano Pires, founder of the Brazilian Centre for Infrastructure.

The way round this is for Bolsonaro to issue an executive order, declaring extraordinary circumstances or a public calamity, he said. “I think that if the price of a barrel continues on a high trajectory . . . the government is likely to do that.”