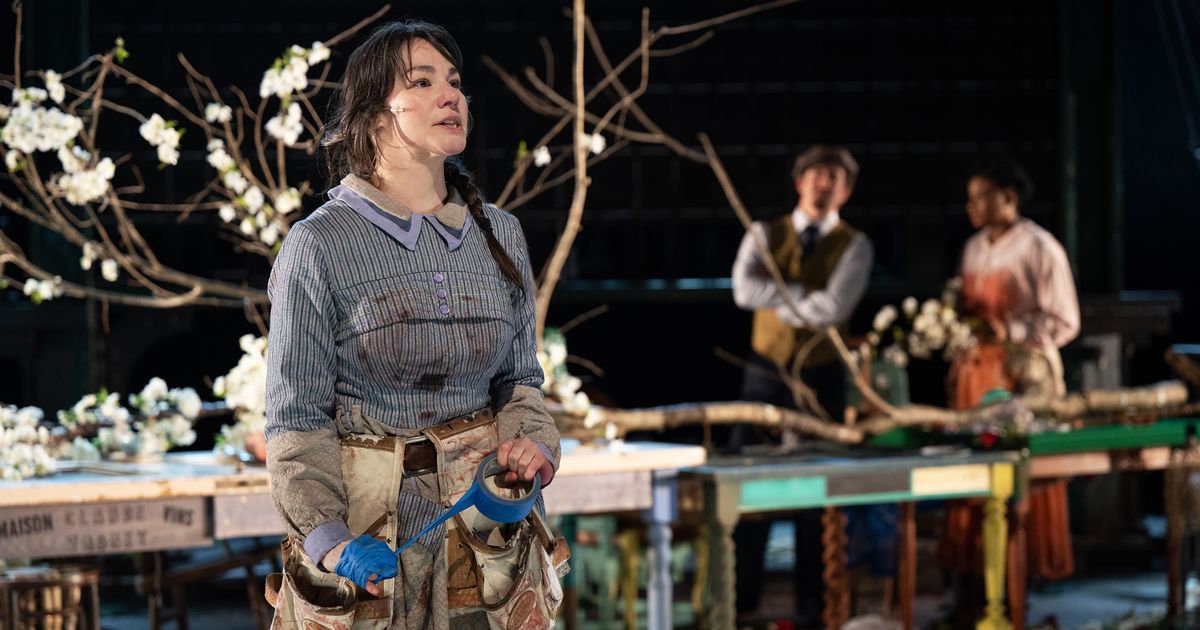 From the Wilma Theater’s streaming production of The Cherry Orchard.
Photo: Johanna Austin

In Russia, before you leave on a trip, you sit on your luggage. It just takes a moment: at the last minute, as you’re about to walk out the door, you perch on your suitcase. I’ve been told it’s a charm to ensure that the traveler will return home, and I’ve also heard that sitting helps you remember what you might have forgotten or that it prevents your home-spirits from chasing after you. Whatever the explanation, though, it’s a little moment of suspension — the pause for luck (or grace) before you step across your threshold.

At the end of Dmitry Krymov’s strange, wild-hearted version of The Cherry Orchard, produced at Philadelphia’s Wilma Theater and streaming until May 15, just one member of the company actually sits on a case. The conclusion of Chekhov’s 1904 play sees Madame Ranyevska’s aristocratic family leaving its estate forever, ousted as much by their own incompetence as the changing class-structure and encroaching debt. Justin Jain plays the usurping bourgeois Lopakhin, who has purchased the house and its beautiful, fruitless orchard. Since only Lopakhin will ever come back through the estate’s doors, only Jain sits on the luggage. The others — Krista Apple’s Ranyevska, as well as her children and servants and hangers on — collapse in various attitudes on the floor among the hatboxes, staring disconsolately into the audience. They look at us as though we might have some answer for them. The question is, of course: Where do we go from here?

And we know the answer. Away. They’ll have to go away. What happens next to Ranyevska’s crew is not really the concern of Chekhov’s drama, which sends his characters into a sort of indistinct watercolor future. But the Russian director Krymov’s production, fiercely engaged and wrenching, cannot stop thinking about the details of that “away.” In fact, the entire fourth act of  this Cherry Orchard has been subsumed into sorrow and worry; every other element — even the play itself — has been relegated to the background.

In a show with a number of thrilling extratextual embellishments (Chekhov-lovers might not remember the volleyball game in Orchard, but somehow Krymov squeezes one in), the best is a huge new character, a railway timetable sign that seems to have attained consciousness. Huge and green, its split-flap letters flip into place to tell characters what’s happening or to make wry, cool-headed comments. At the show’s beginning, the sign lets us know we are traveling. “NEW YORK — PARIS” it reads, whirring its message into place, letter by letter. “PARIS — MOSCOW.” Then, and you must know this was going to happen: “MOSCOW — KHARKOV.” The real Kharkiv—pointedly spelled the Russian way on that board rather than the Ukrainian—is in ruins. Krymov cannot make this Cherry Orchard without showing us, at least via oblique reference, the front. And since he has been openly anti-war and anti-Putin, he cannot go home either, perhaps for the rest of his life.

What is theater in the face of something like that? Heartbreak, war, permanent exile — these things all shatter simple storytelling. Two inventively structured plays in New York this spring have tried to demonstrate that shattering: Mona Mansour’s touching The Vagrant Trilogy, which uses what André Aciman called “mnemonic arbitrage” to show two possible futures for a Palestinian man driven in (or out) of a Lebanese refugee camp in 1967, and Sanaz Toossi’s elegant Wish You Were Here, which imagines a group of Iranian women in the ’70s and ’80s, their numbers slowly but inevitably reduced — year after year — by expatriation and covert flight.

This Cherry Orchard production, which is otherwise spirited and messy and funny, can’t hop forward in time as these other plays do — it’s about (sort of) a horror happening now. So it gives up. In the final act, the big sign takes responsibility for the text almost completely. As the company subsides into listlessness, entire pages of the play appear on the board, fluttering into place too quickly to read. It helps if you already know The Cherry Orchard, or I suppose you could just let understanding go, since the plot seems as disposable as a schedule for a train we aren’t taking. Krymov’s The Cherry Orchard exemplifies a type of vigorous theatrical intervention we only rarely get to see in this country. Americans adapt old plays tentatively, so watching a titan of the Russian experimental theater get his hooks into Chekhov can be disorienting and thrilling. Did we know that you were just allowed to … add characters? Skip an act? Make the governess Carlotta (Suli Holum) into a sunflower-seed-spitting rabble-rouser among the servants? You are allowed, of course, and once you tear your attention away from the narrow confines of U.S. theater, you see that many folks are doing it.

Krymov’s technique clearly feels galvanizing to the Wilma’s Hothouse Company, which has formed during the years of preparation for this production into something fine and strong. It’s hard to describe, but you can sense from the collective, even when they’re goofing around, that they are involved in something important. One of the greatest productions I have seen in my life (though I only halfway understood it) was Krymov’s Tararabumbia. I saw it in Moscow, more than a decade ago. In that show, 80 performers showed us bits from Chekhov’s plays and moments from Chekhov’s own biography, played as they traveled past the audience on a massive conveyor belt. There’s a link between that production and this one — the certainty that Chekhov can handle a bit of tossing about; the dramaturgical machine as a literalized object; the feeling that, at any moment, a marching band might come through. They were also both valedictions. Tararabumbia was created in honor of Chekhov’s 150th birthday, a sort of ecstatic, indoor funeral procession. The Cherry Orchard is a show, yes, but it’s also a farewell. Krymov has left Russia, but it has taken this whole theater full of American actors — tears in their eyes, luggage at their feet — to wave his goodbye.

The Cherry Orchard can be streamed at wilmatheater.org through May 15.

Sign up to get New York’s week in reviews.